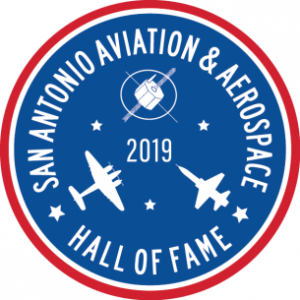 “The mission of The Dee Howard Foundation is to honor San Antonio’s civil and military aviation and aerospace history, and to nurture our future generations of innovators,” said Wayne Fagan. “There is no doubt that the outstanding honorees for the 2019 Hall of Fame Class have both contributed immensely to the industry of civil and military flight, but have represented the City of San Antonio in the highest manner.”

The 2019 Hall of Fame Awards Dinner will take place on Thursday, April 4th at the GDC Technics Hangar, located at 607 N. Frank Luke Drive at Port San Antonio. The reception will begin at 6:00 PM with dinner served at 7:00 PM. A static display of current and vintage civil and military aircraft will be on display, as well as exhibits by participating schools and education partners in the Dee Howard Foundation Pre-K thru 12 Aeronautical STEM initiative.

Distinguished JBSA units will present the National Colors and provide musical entertainment throughout the evening, and country music singer and songwriter Rebecca Henricks will sing a rendition of the National Anthem. Rebecca will be accompanied by her husband, Col. (Ret.) Tom Henricks, a four-time NASA Space Shuttle astronaut. The Honorable Ron Nirenberg, Mayor of the City of San Antonio, will provide welcoming remarks, followed by Bonnie J. Dunbar, PhD ,five time Shuttle Astronaut and former President & CEO of the Museum of Flight, who will provide the keynote address.

In addition to the enshrinement of the 2019 Hall of Fame honorees, the 2019 Dee Howard Foundation STEM Education Excellence Award (SEEA) will be presented by Dr. Wowek (Sean) Kearney, Interim Dean for the College of Education and Human Development, Texas A&M – San Antonio. SEEA recognizes an outstanding Pre-K thru 12 STEM teacher or administrator and provides assistance to them to incorporate aviation and aerospace subject matter in their STEM programs. This year the SEEA will be presented to an elementary school teacher.

The Hall of Fame Awards Dinner is open to the public. For information regarding tickets, sponsorship, or donations go to https://www.deehoward.org/saaahof-2019-dinner .The Dee Howard Foundation is a 501C(3) non-profit organization.

Current members of the San Antonio Aviation and Aerospace Hall of Fame include:

Earl & Tom Slick:  In the January 28, 1946 issue, Time Magazine wrote ”At San Antonio’s tortilla-flat Alamo Field (the name of San Antonio International Airport when it was first open for combined military and civilian use at the end of WWII) last week, 50 men in coveralls scurried over, under, into, out of and around nine fat-bodied Curtiss Commando planes. They installed refrigeration equipment in some, heaters in others. On the silver sides of all nine, they painted the royal blue insignia of a brand-new air-freight enterprise: Slick Airways, Inc.” The idea for the airline was Earl Slick’s, it was formed as the air cargo division of the Slick Corporation which was owned by Earl and brother Tom—Earl was 25 and Tom was 29 at the time. Earl ran the airline and served as President, Tom served as Vice President, and stepbrother Charles Urschel Jr. served as treasurer. By 1951 Slick Airways had become the largest all-cargo airline in the US. In April 1951 Slick Airways became the first airline to operate the freighter variant of the Douglas DC-6. The airline ceased operations in 1966.

Lt. Col. (Ret.) Francis R. (Dick) Scobee:  Lt. Col. Scobee was born in Cle Elum, Washington, graduated from Auburn Senior High School, in Auburn, Washington, enlisted in the United States Air Force in 1957, trained as a reciprocating engine mechanic, and was subsequently stationed at Kelly Air Force Base in San Antonio. While in San Antonio, Lt. Col. Scobee met and married Virginia June Kent of San Antonio, and while in San Antonio, started his college studies by attending San Antonio College for two years, which led to his selection for the Airman’s Education and Commissioning Program. He graduated from the University of Arizona with a bachelor of science degree in Aerospace Engineering. He received his commission in 1965, and after receiving his wings in 1966, completed a number of assignments including a combat tour in Vietnam. He returned to the United States and attended the U.S. Air Force Aerospace Research Pilot School at Edwards Air Force Base, California. After graduating in 1972, he participated in test programs for which he flew such varied aircraft as the Boeing 747, the X24B, the transonic aircraft technology (TACT) F-111, and the C-5. He logged more than 6,500 hours flying time in 45 types of aircraft. Lt. Col. Scobee was selected as an astronaut candidate by NASA in 1978 and completed a 1-year training and evaluation period in August 1979. In addition to astronaut duties, Lt. Col. Scobee was an Instructor Pilot on the NASA/Boeing 747 shuttle carrier airplane. He first flew as pilot of STS 41-C which launched from Kennedy Space Center, Florida, on April 6,1984. The mission duration was 7 days before landing at Edwards Air Force Base, California on April 13,1984. Lt. Col. Scobee was spacecraft commander on STS 51-L, which launched from Kennedy Space Center, Florida, at 11:38:00 EST on January 28,1986. The crew onboard the Orbiter Challenger included the pilot, M.J. Smith (U.S. Navy), three mission specialists, Dr. R.E. McNair, Lt. Col. E.S. Onizuka (U.S.Air Force), and Dr. J.A. Resnik, as well as two civilian payload specialists, G.B. Jarvis and S.C. McAuliffe. The STS 51-L crew died on January 28, 1986 when Challenger exploded after launch. During his illustrious career, Lt. Col. Scobee was awarded many honors, among them, the Air Force Distinguished Flying Cross, the Air Medal, two NASA Exceptional Service Medals, and was posthumously awarded the Congressional Space Medal of Honor.

General (Ret.) Mark A. Welsch III:  General Mark A. Welsh III was born and grew up in San Antonio, earned a Bachelor of Science Degree from the U.S. Air Force Academy and entered the Air Force in June 1976. During his Air Force career, Gen. Welsh also earned a Master of Science degree in computer resource management from Webster University, and graduated from the Army Command and General Staff College, the Air War College, and the National War College as well as completing other post graduate studies at Massachusetts Institute of Technology, Syracuse University, John Hopkins University, and Harvard University. Gen. Welsh received his undergraduate pilot training at Williams Air Force Base, Arizona. Gen. Welsh was rated as a Command Pilot and has over 3,300 flight hours in F-16, A-10, T-37 and TG-7A aircraft. During his distinguished Air Force career Gen. Welsh was assigned to numerous operational, command and staff positions including Commander of the U.S. Air Forces in Europe and Commander of NATO’s Air Command, Ramstein Air Base, Germany, Associate Director of Military Affairs at the Central Intelligence Agency, and as Commandant of the United States Air Force Academy. Gen. Welsh became the 20th Chief of Staff of the Air Force in August 2012, serving as the senior uniformed Air Force officer responsible for the organization, training and equipping of 664,000 active-duty, Guard, Reserve, and civilian forces serving in the United States and overseas. As a member of the Joint Chiefs of Staff, Gen. Welsh and other service chiefs functioned as military advisers to the Secretary of Defense, National Security Council, and the President. Gen. Welsh received numerous awards and decorations, including the Defense Distinguished Service Medal with oak leaf cluster, Distinguished Service Medal with oak leaf cluster, Defense Superior Service Medal with oak leaf cluster, the Legion of Merit with oak leaf cluster, and the Distinguished Flying Cross with oak leaf cluster. In June 2016 Gen. Welsh retired from the Air Force and on August 15, 2016, Gen.Welsh became and currently serves as Dean and Holder of the Edward & Howard Kruse Endowed Chair, and Executive Professor of The Bush School of Government & Public Service at Texas A&M University.