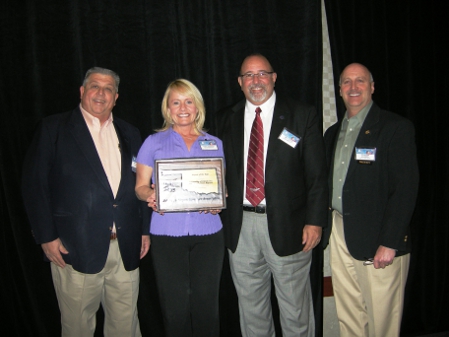 The OAOA, which is comprised of airport managers, airport board members and various other airport and city officials from across the state, presented the awards during its annual conference in Midwest City.

Strong, who has been airport administrator since 1998 and has served as an officer for various aviation-related advocacy groups while at OU, said his staff deserves all the credit for making sure the airport is safe, effective and efficient, noting that they are “constantly on alert to sustain the highest levels of safety and security for all of our users.”

Max Westheimer Airport, which is located on OU’s north campus, has made several improvements to its infrastructure during the last five years as well as various safety and security enhancements. The airport completed several paving projects including rehabilitating the main runway, apron and taxiway. It has also installed navigational aids; installed security fencing and gates as well as security cameras around the terminal building and main hangar areas; and made improvements to the control tower that included installing new communications equipment, surveillance cameras and a new heating and air conditioning system.

A key component to the recent successes and accomplishments at Westheimer Airport, according to Strong, is building and maintaining good community relations. He pointed to the on-going efforts by OU staff and Norman Chamber of Commerce volunteers to showcase the airport during its annual aviation festival or open house as a prime example of their community relations efforts. Attendance at the festival has reached about 3,000 visitors in recent years, he said.

Strong said that he was humbled for being selected by his peers as airport manager of the year in Oklahoma.

“For many years, I have held to the belief that anything worth doing is worth doing well. To that end, I have chosen to become and stay involved in organizations such as OAOA, which gives me the opportunity to learn and help others. I want to thank them for this wonderful award,” Strong said.

Other award recipients recognized during the OAOA conference included Carl Cannizzaro, secretary/treasurer for Horizon Engineering Services Company in Tulsa, who received the Pioneer Award; LBR Inc., Airport Consultants, which received the Corporate Award; and Gary Johnson, manager of Stillwater Regional Airport, who received the President’s Award. In addition, retiring OAOA Executive Director Pam Lankford was recognized for her outstanding and dedicated service to the OAOA.

OAOA’s mission and goals are to:

* Promote and encourage the public’s understanding of the value of aviation and airports to the community.
* Promote safety in the development of airport facilities and operating procedures.
* Provide for the exchange of ideas, methods, information and experience as related to the operation and management of airports.
* Support academic endeavors of the membership and the aviation education programs in the State of Oklahoma.
* Provide a unified voice for airports within the state to local, state, and federal agencies as well as to the state Legislature and Congress on all proposed and pending legislation relating to aviation.