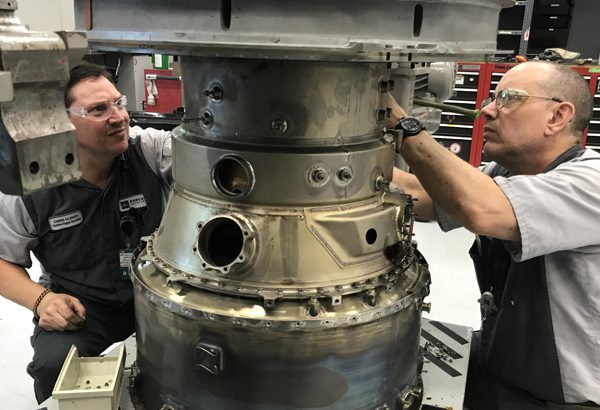 With the most up-to-date industry tooling and training, Duncan Aviation is fully equipped to perform heavy CZIs (Core Zone Inspections) as the first set of Honeywell TFE731 engines scheduled for MPI/CZI arrives at the company’s Turbine Engine Overhaul Facility in Lincoln, Nebraska.

The engines came off a Bombardier Learjet 45 managed by Jet Linx Omaha. According to Dave Zimmerman, Jet Linx Omaha Maintenance Manager, it was an easy decision on where to send the engines.  “We are very familiar with Duncan Aviation and the level of quality service they consistently deliver. Their technicians are routinely in our hangars working on many of our managed aircraft. Now that they are a Honeywell Heavy Maintenance Service Center, we are totally confident these engines will receive that same level of quality and care.”

Mike Bernholtz, Duncan Aviation Turbine Engine Service Sales Rep, has noticed an increase in interest among business aviation operators now that the company is able to complete the entire engine overhaul process in-house. “The industry response has been great. I talk to customers daily fielding questions about what our capabilities are now and when then can get on our schedule. ”

Once this MPI/CZI event is completed and prior to delivery to Jet Linx, the TFE731s will be sent to the engine manufacturer in Phoenix for a Certification Test Cell run. Duncan Aviation is planning a facility expansion with a new test cell and control room. The test cell is under construction and is scheduled to be fully operational by the end of 2017.