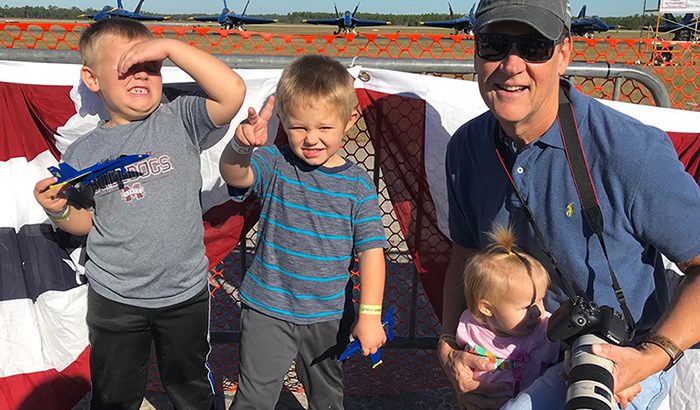 Photo above – Tommy and his grandkids at the 2018 Blue Angels Homecoming Show.

After 21 years with the Aeronautics Division of the Mississippi Department of Transportation, Thomas (Tommy) M. Booth Jr., P.E. has set a retirement date of June 30th.

“I’ve always heard that if you do something you are passionate about, you will never work a day in your life.  That is so true,” said Booth.  “It has been such a pleasure working with the airports in Mississippi over the past 21 years – fourteen of those as the Aeronautics Director.”  Booth said it has been a privilege to work side by side with airport consultants and the FAA to help communities with their airport projects over that time span. “We’ve accomplished so much with our different funding programs to help the airports with their capital improvements and maintenance projects,” said Booth. “It was definitely a team effort.”

Booth has been involved in the aviation industry nationally as well, working through the National Association of State Aviation Officials (NASAO). “What an incredible organization,” said Booth. “Greg Pecoraro and his team are doing a fantastic job promoting aviation nationwide.” Booth said the highlight of his career was serving as NASAO’s chairman in 2013. “I learned so much from Henry O during that time,” referring to the former NASAO president, Henry Ogrodzinski. “I cherish the friendships made through the years, and hopefully, I will remain connected with NASAO in the future,” said Booth. “If not, I look forward to being a NASAO alum!”

Booth said he is giving some thought to his next steps, including the possibility of working as an aviation consultant. If that happens, his desire would be to continue working with airports, the states, and keeping his ties to NASAO.

Regardless, Booth says he will take some time off to enjoy his jet ski this summer and catch up on categorizing thousands of aviation photos he’s taken over the years.