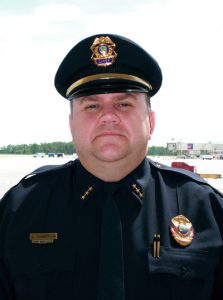 Chamberlain comes to LCPA with more than 19 years of law enforcement experience. Most recently, he served as the deputy chief of the Minneapolis/St. Paul International Airport Police Department, where he started his airport career in 2001 as a detective and rose through the ranks, from sergeant, to lieutenant in patrol, aviation security and then the professional standards divisions. Prior to this, Chamberlain worked in U.S. Customs and Border Protection as a border patrol agent. He also served four years in the U.S. Navy, as well as time in the U.S. Navy Reserves.

Chamberlain is a member of the International Association of Chiefs of Police, Airports Law Enforcement Agency Network and Airports Council International – North America.

Chamberlain attended staff and command school at the Northwestern University Center for Public Safety in Evanston, Illinois, and completed a Chief Executive Leadership course at the Southern Police Institute at the University of Louisville. He has a master’s degree in criminal justice leadership/human services from Concordia University and a bachelor’s degree in law enforcement from Metro State University, both in St. Paul, Minnesota.