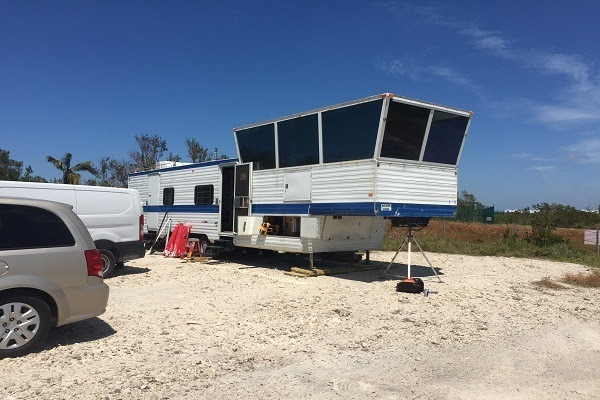 A mobile air traffic control tower has arrived at Key West International Airport in Florida after a road trip down the East Coast by trailer from Hartford, CT. The Federal Aviation Administration (FAA) repositioned the fully-equipped tower to provide air traffic services for all of the aircraft operating in and out of Key West that are supporting the relief and recovery of the isolated Florida Keys in the wake of Hurricane Irma.

The FAA also has temporarily located many of the tower’s controllers closer to the airport to reduce lengthy commutes.

In addition to the mobile tower, the FAA has brought a trailer to the site to support the tower controllers with an air-conditioned break room and lavatories. Before the tower arrived, controllers were managing air traffic at the airport from a small tent.

As controllers started working the radios in the new mobile tower at Key West this morning, the FAA was making plans to pack up another mobile tower it airlifted to St. Thomas last week and temporarily relocate it to a safer mainland position in advance of Hurricane Maria. The tower will remain on a military C-17 until the storm passes and will immediately head back to St. Thomas after the storm.

Government agencies with an FAA Certificate of Authorization (COA) and private sector Part 107 drone operators who want to fly to support of response and recovery operations are strongly encouraged to coordinate their activities with the local incident commander responsible for the area in which they want to operate.

If UAS operators need to fly in controlled airspace or a disaster TFR to support the response and recovery, operators must contact the FAA’s System Operations Support Center (SOSC) by emailing 9-ATOR-HQ-SOSC@faa.gov to determine the information they need to provide in order to secure authorization to access the airspace. Coordination with the SOSC may also include a requirement that the UAS operator obtain support from the appropriate incident commander. The FAA may require information about the operator, the UAS type, a PDF copy of a current FAA COA, the pilot’s Part 107 certificate number, details about the proposed flight (date, time, location, altitude, direction and distance to the nearest airport, and latitude/longitude), nature of the event (fire, law enforcement, local/national disaster, missing person) and the pilot’s qualification information.

The FAA warns unauthorized drone operators that they may be subject to significant fines if they interfere with emergency response operations. Many aircraft that are conducting life-saving missions and other critical response and recovery efforts are likely to be flying at low altitudes over areas affected by the storm. Flying a drone without authorization in or near the disaster area may unintentionally disrupt rescue operations and violate federal, state, or local laws and ordinances, even if a Temporary Flight Restriction (TFR) is not in place. Allow first responders to save lives and property without interference.