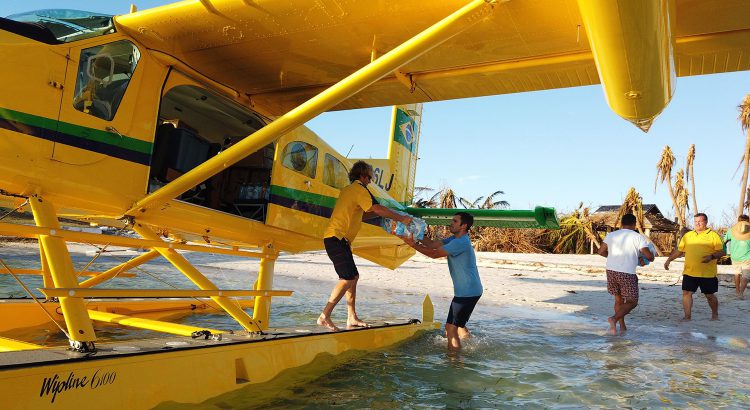 The German based Dieter Morszeck Foundation is providing aid to the victims of hurricane Dorian in the Bahamas by flying rescue and relief missions out of Florida. Three of their aircraft are airlifting injured and sick persons from the areas ravaged by the hurricane, and bringing in medical personnel, drinking water and food to the northern islands.

Three airplanes of the Dieter Morszeck Foundation have been flying these missions to the Bahamas for more than a week. They set off from Fort Lauderdale in Florida to the hard-hit northeast of the Bahamas, laden with food, water and other emergency supplies for the Bahamian people affected by the category 5 hurricane. So far, over 120 sick or injured individuals have been flown from the ravaged islands to the capital Nassau or to Florida, where they are receiving medical treatment. Over 40 tons of water, food and other supplies have been brought in to the remote islands.

The foundation’s light, single-engine airplanes are equipped with amphibious floats and can take off and land on water or concrete runways. The Quest Aircraft Kodiak 100, Pilatus PC-6, and Cessna 206 aircraft can carry up to eight passengers or one ton of freight. They also allow for sick or injured patients to be transported lying down.

They had originally been purchased by the Dieter Morszeck Foundation to provide medical support to the indigenous people of the Amazon. “We are saving people who have been injured by hurricane Dorian or who have fallen seriously ill,” says pilot Sven Lepschy, originally from Germany, who has made West Palm Beach, FL his home and who initiated the relief and rescue missions of the Dieter Morszeck Foundation. Mr. Lepschy is also the CEO of WACO Aircraft, a manufacturer of open cockpit sport biplanes and located in Battle Creek, MI.

“Our small airplanes can reach even the outermost islands in the northeastern corner of the Bahamas. Many people there have lost everything. Their houses are destroyed, and they are currently living under dreadful sanitary conditions,” says Mr. Lepschy. The foundation’s amphibious planes, able to land on water and short runways, can airlift people in distress on the beaches or off boats on the waters along the remote islands. “The missions are very challenging. With the floats, we can land on water, but the storm has left a lot of wood and wreckage in the sea,” says Cédric Gitschenko, another of the foundation’s pilots. The Swiss aviation professional lives part-time on the Bahamas and has been flying rescue missions non-stop since Thursday. The tours, he adds, take an emotional toll, too. “My heart bleeds when I see the destruction the hurricane brought. Thanks to the Dieter Morszeck Foundation, though, and many donations and volunteers from Florida, we can help alleviate the suffering.”

The Dieter Morszeck Foundation carries out its rescue missions in cooperation with Florida Seaplanes, an Orlando-based flight school, and Gold Aviation of Fort Lauderdale. David Hensch is the third pilot alongside Sven and Cédric; Sven’s wife Nathalie, a Swiss native and former flight attendant, takes care of the patients in the cabin.

The Dieter Morszeck Foundation was established by the German industrialist from Cologne, Dieter Morszeck, in 2016. The foundation was set up to finance and operate flight rescue missions, conduct medical research, provide medical assistance and supplies, further education, and foster children and young adults living in poverty. In Brazil, the organization is setting up a mission to provide medical services for the indigenous people of the Amazon with ‘flying doctors’. To that end, it has bought several amphibious airplanes equipped for medical transportation. They are currently deployed on a relief and rescue mission on the Bahamas.