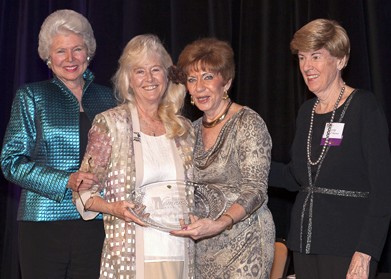 Penny R. Hamilton, Ph.D. was inducted into the Colorado Women’s Hall of Fame on March 20th, joining two other Grand County, Colorado laureates: Emily Howell Warner, long-time Grand County resident and the nation’s first woman airline pilot to be hired by a major, scheduled airline, and the first woman to become an airline captain, and the late Dr. Susan Anderson “Doc Susie,” the pioneering female physician, who practiced in Grand County beginning in 1907 and, despite incredible hardships and even the chauvinistic attitudes of the time, treated lumberjacks, ranchers, railroad workers, and even animals — over the years saving hundreds of lives.

“To even be mentioned in the same breath with Captain Emily Howell Warner and ‘Doc’ Susie, takes my breath away,” said Hamilton, who is a contributing writer for the State Aviation Journal. (Pictured left to right are, former Miss America Marilyn Van Derbur Atler, Hamilton, Betty Heid (Hall of Fame Chairperson), and Emily Howell Warner.)

The Colorado Women’s Hall of Fame inducts women, both historical and contemporary, who have significant ties to Colorado and who, during their lifetimes: Made significant and enduring contributions to their fields of endeavor, elevated the status of women, helped open new frontiers for women and for society, and inspired others by their example.

In announcing its selection, the committee cited Hamilton: “… as a General Aviation pilot who co-holds World and National Aviation Speed Records with her husband, set in October 1991; inducted into the Colorado Aviation Hall of Fame in 2011; inducted into Amelia Earhart International Forest of Friendship Class of 2013; is Executive Director of the Teaching Women to Fly Research Project, dedicated to bringing more women into aviation; author of two books aimed at encouraging and training women in aviation and flight instruction. In 1994, the FAA named a new holding intersection in Colorado at an altitude of 15,500 feet above sea level after her as part of the US aeronautical system; selected in 2009 as the ABC TV-Denver 7 “Everyday Hero” for her more than 25 years of public service and community aviation education programs. Directs Colorado Airport History Preservation Project; was first Executive Director of the Grand County Business & Economic Association and was instrumental in having a 100-year history of Granby, CO published for its centennial celebration.”

In April, 2013, Dr. Hamilton was named by Columbia College as its Distinguished Alumnus for 2013. In October, 2013, the Eli Lilly pharmaceutical company invited Dr. Hamilton to Indianapolis to witness her oil painting “Oncology Odyssey” being painted as a huge mural on a wall in downtown Indianapolis. The mural commemorates her over six-year journey from cancer victim to cancer victor. Her nature photography is often seen on Denver’s Channel 9, the NBC affiliate, and on Rocky Mountain PBS-TV.

In early December, 2013, her second history of the Granby area entitled: “Around Granby” will be released by Arcadia Press. With her husband, William Hamilton, J.D., Ph.D., she is also the co-author of a series of espionage novels. The latest in the four-novel series, JFK: The Umbrella Conspiracy by William Penn, is available at the Granby ACE Hardware, the Rocky Mountain General Store, and at the Cozens Ranch Museum. All four of her novels are available via Amazon.com, on Kindle, on Lobo.com, and other e-book platforms.