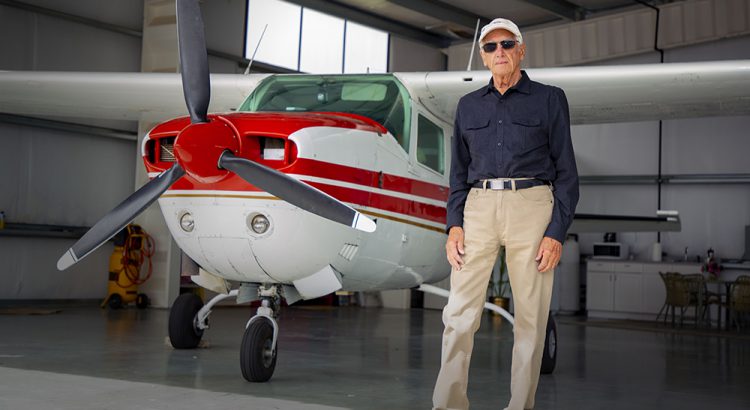 This is the first award of its kind presented by the CAB intended to specially honor and recognize individuals who have exhibited unprecedented contributions to the Colorado aviation community. Individuals presented with this extraordinarily-limited award have also demonstrated values that fall in line with the CDOT Division of Aeronautics mission to advance a safe, efficient, and effective statewide air and space system through collaboration, investment, and advocacy.

Walt Barbo joined the Army Air Corps on December 9, 1941, two days following the attack on Pearl Harbor.  In December of 1942, during WWII, Barbo began flying P-38 Lightnings in New Guinea with the 475th Fighter Group. Barbo flew with the United States Air Corps until May of 1946.

In the late 1950’s, Walt attended the University of Washington, earning a number of engineering degrees, including a B.S. and Masters in Civil Engineering, and a B.S. in Industrial Engineering. Walt’s Master’s thesis was to develop a Master Plan for Boeing Field in Seattle Washington. Airport officials were so impressed by Walt’s work on his thesis, they hired him as the Airport Engineer. Walt would go on to also earn a Master’s in Air Transportation from the University of California Berkley.

Following the signing of the Federal Aviation Act of 1958, which created the Federal Aviation Administration (FAA), Walt began working for the FAA in 1963 as an Airport Engineer.  Walt participated in writing language that created the Federal Airport & Airway Development Act of 1970. This legislation paved the way to develop a sustainable federal funding source for the aviation system in the United States. In 1971, he transferred from FAA Headquarters in Washington D.C. to Denver, Colorado where he would become the Assistant Manager of a newly-created division of the FAA; the Rocky Mountain Region Airports Division.

In 1980, Barbo was appointed as the Chief of what would become known as the FAA Northwest Mountain Region Airports District Office.  During his days working with the FAA, Barbo was the driving force behind the development of the Federal Reliever Airport Program which designated certain airports as “reliever airports” – a federally-funded system of airports designated to provide additional air traffic capacity to areas where the primary commercial service airport had reached maximum traffic capacity.

One of Walt’s focuses working for the FAA in Colorado was to improve commercial air transportation into Colorado’s mountain resort communities. This resulted in the construction of improved runways and infrastructure at the Telluride Regional Airport (TEX), Hayden-Yampa Valley Regional Airport (HDN), and the Eagle County Regional Airport (EGE).

In 1979, Walt was integral in the certification of a designated Short Takeoff & Landing Airport (STOLPORT) in Avon, CO to be utilized by Colorado’s Rocky Mountain Airways.  The Avon STOLPORT would provide commercial air service to the Vail Valley and visitors of the Vail/Beaver Creek Ski Resort. Walt was also key in the development of the Front Range Airport (FTG) as a reliever to Stapleton International Airport, and the Meadow Lake Airport (FLY) as a reliever to the Colorado Springs Municipal Airport (COS).

In 1988, after 25 years of service with the FAA, Walt retired as the Manager of the FAA Northwest Mountain Region Airports District Office.  Following his retirement, Walt dedicated his focus on the next generation of aviators with development of the Fantasy of Flight Foundation, a youth education program designed to inspire kids interested in aviation with computer flight simulators built and maintained by Barbo himself.

Walt Barbo remains a key fixture in the in the Colorado and national aviation community.  Walt has been involved in the following aviation and community organizations:

Today, at the age of 95, Walt continues to fly his personal aircraft based at the Front Range Airport/Colorado Air & Space Port (FTG) located in Watkins, Colorado.