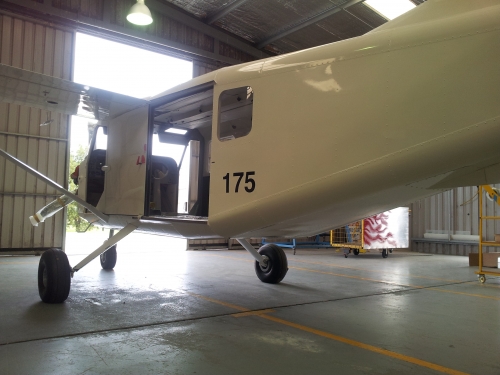 GA8 Airvan #175 has rolled off the assembly line at GippsAERO in Morwell, Victoria, and in so doing makes Airvan the most produced Australian designed and manufactured aircraft in history. The event will be marked with a ceremony at the GippsAero factory, Latrobe Valley Airport on Thursday April 5.

The tile has until now been held by the N24 Nomad, however with the completion of the latest GA8 aircraft, the Airvan has now taken this prestigious title.
The prototype Airvan first flew on March 3 1995, with certification following in December 2000. The first deliveries were made to Fraser Island Air later that month. Since then the aircraft has gained wide acceptance in the general aviation market, and is now flying in 34 countries worldwide. Airvans fly missions in some of the most demanding aviation environments in the world; and only last week GippsAero added Chile to the list by delivering a GA8 to an air taxi company based in Temuco.
The aircraft is well known for its low operating costs and versatility, and has been adopted by a growing number of commercial operators in tourism, air taxi, skydive, and law enforcement segments. The previous record holder, the N24 Nomad, was designed and built by the Australian Government Aircraft Factories and had retained its position for a number of years. GippsAero acquired the type certificate for the Nomad in May, 2008; and the company now holds the type certificates for the first and second highest volume commercial aircraft manufactured in Australia. The Airvan’s new title represents a new milestone for the company as it looks to further build on its dominance of the Australian aviation industry, and expand its worldwide market share.
Co-Founder, Peter Furlong reflected “Airvan number 175 is a truly remarkable achievement for GippsAero and everyone involved in the design and manufacture of the Airvan. I personally look forward to many more Airvan milestones in the future.”
“Airvan number 175 is a huge milestone for GippsAero and the GA8 Airvan,” George Morgan, Co-Founder and Director of Technology at GippsAero added “being highly involved in the early production of the GAF Nomad; this achievement means a great deal to me. I’m looking forward to many more milestones, including the upcoming production of Airvan number two-hundred!”
Over the many years of Airvan flight there have been some significant and memorable events: When the Airvan made its first appearance at the Australian International Avalon Airshow in 1995, the roll out of Airvan number 100 in 2006 and in 2010 when Airvan number 120 circumnavigated the world.
Terry Miles, CEO of GippsAero observed “The manufacture of #175 is yet another significant event for GippsAero and Mahindra Aerospace. The achievementis to be cherished by all and we hope to see #200 within the next few months which will signify another milestone for the company and its expanding international customer base”
Aircraft #175’s final destination is the United States, where it will begin work as the new American demonstrator aircraft, helping to cut through the American aviation market; the most competitive and prevalent in the world.
About GippsAERO/Mahindra Aerospace
GippsAero, the Australian manufacturer of the GA8 AIRVAN, is the aircraft manufacturing division of Mahindra Aerospace. The company has manufactured in excess of 200 aircraft, which fly in 34 countries around the world, including USA, Australia, Europe, Africa and Asia.
Mahindra Aerospace is the aircraft and aero-structure manufacturing division of Mahindra Systech, and a new global player in the delivery of aircraft, aero-structures and aircraft development services. With its acquisition of two Australia-based aviation companies, Aerostaff Australia – producer of aerospace components for the world’s OEMs – and GippsAero – producer of the Airvan family of utility aircraft – Mahindra Aerospace has laid the foundations towards achieving its goals.
About The Mahindra Group
The Mahindra Group focuses on enabling people to rise. Mahindra operates in the key industries that drive economic growth, enjoying a leadership position in tractors, utility vehicles, information technology and vacation ownership. Mahindra has a presence in the automotive industry, agribusiness, aerospace, components, consulting services, defence, energy, financial services, industrial equipment, logistics, real estate, retail, steel and two wheelers.
A US $14.4 billion multinational group based in Mumbai, India, Mahindra employs more than 144,000 people in over 100 countries.
In 2011, Mahindra featured on the Forbes Global 2000 list, a listing of the biggest and most powerful listed companies in the world. Dun & Bradstreet also ranked Mahindra at No. 1 in the automobile sector in its list of India’s Top 500 Companies. In 2010, Mahindra featured in the Credit Suisse Great Brands of Tomorrow.
In 2011, Mahindra acquired a majority stake in Korea’s SsangYong Motor Company.
For further information, please visit www.mahindra.com
Connect with us on www.facebook.com/mahindragroup
Attachment: