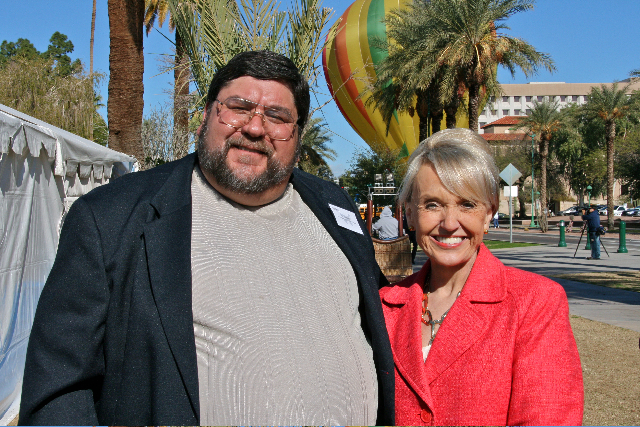 Supporters of aviation in Arizona rallied on the lawn of the state capitol Wednesday, January 20th with hopes of making an impact on state legislators and their staff. The message was to promote the benefits and economic impact of aviation in Arizona. Governor Jan Brewer attended and spoke with representatives of a number of aviation organizations.
"Now more than ever it is critical that the Governor and Legislature understand the importance of our industry as an economic driver, tax contributor, and significant employer in Arizona," said Joe Husband, event chair and former president of the Arizona Airports Association. (AzAA) "Aviation industry development and infrastructure maintenance and expansion are critical to the continued preservation and growth of this most important element of the State’s transportation system," said Husband.
More than 300 people visited the event this year and according to Husband it appeared to be the best event to date regarding attendance. A number of state senators and house members attended including

Jerry Weiers, one of a few Arizona politicians with aviation backgrounds. Husband said that they had excellent participation by the Governor, her staff, legislators and their staff, industry representatives and the press.
"Having an opportunity to make positive contributions to the industry I love is a very rewarding and valuable experience," said Husband. "Chairing this year’s Aviation Day event was a demanding and difficult task that I am most proud to have been a part of."
The annual Aviation Day event was developed by Scott Gray former Scottsdale airport manager during his term as Immediate Past President of the Arizona Airports Association and has traditionally become the responsibility of the immediate past president position. Husband will be passing the responsibility on to the current AzAA president, Jeff Tripp, Project Director at Mesa Falcon Field, upon the expiration of Tripp’s term in the Spring.
"The great success that our team achieved with this event was of great value to our industry and the State," said Husband. "I will always be very proud and fondly remember this achievement as an important part of my career in Aviation."