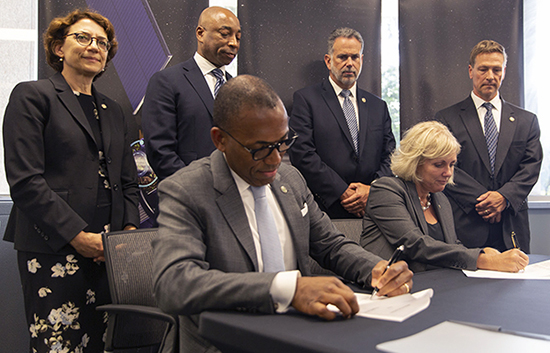 National Transportation Safety Board Chair Jennifer Homendy and Federal Aviation Administration Acting Administrator Billy Nolen signed an agreement Friday clarifying the roles of their respective agencies and how the NTSB and FAA will work together to investigate commercial space mishaps.

“For over three decades, the NTSB has led and supported major commercial space mishap investigations that have made human spaceflight safer to this day,” Homendy said. “This agreement is proof that the federal government can keep pace with the exciting advances taking place in the private sector while also prioritizing safety as we enter a new space age.”

“This agreement reflects our shared goal to ensure a safe, robust and vibrant U.S. commercial space industry,” said the FAA’s Nolen. “This will help us ensure that safety lessons learned move into the operation as quickly and seamlessly as possible.”

The NTSB will be the lead investigative agency for commercial space launch or reentry mishaps that result in:

The FAA will be the lead investigative agency for all other commercial space mishaps.

The last agreement between the two agencies was signed 22 years ago, long before commercial human spaceflight was a reality. The new Memorandum of Agreement identifies investigative responsibilities, interagency notification procedures and reporting responsibilities of the NTSB and FAA in connection with commercial space mishap investigations. The document also describes how the agencies will coordinate on the exchange of information, data and use of resources or services.

“I want to thank Acting Administrator Nolen and the FAA for working with us to modernize this vital agreement,” said Homendy. “NTSB’s working relationship with the FAA, much like the procedures outlined in the memo, has been transformed for a new era of commercial spaceflight. The American people are safer for it.”

The NTSB is currently reviewing public comments on the Notice of Proposed Rulemaking issued in its November 2021 proposal codifying its investigative procedures for commercial space accidents and incidents.