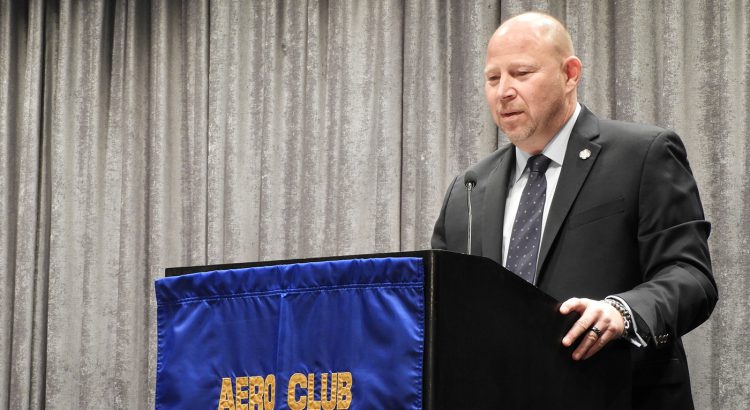 Air traffic controllers are dangerously demoralized – that was the message delivered today by Paul Rinaldi, President of the National Air Traffic Controllers Association (NATCA), during the Aero Club of Washington DC’s monthly luncheon.

During a somber speech that was at times tinted with sadness, Rinaldi revealed that, at the height of the recent Federal shutdown, the U.S. air traffic control system “was on the verge of unravelling.” To illustrate, he candidly shared that veteran controllers were not only making mistakes – but mistakes that they had never before made in their entire careers.

Rinaldi elaborated by pointing out that air traffic control facilities are made to be as distraction free as possible. Yet the shutdown caused tremendously stressful, and very personal, distractions to controllers.  He noted that these highly-trained professionals were resorting to food banks in order to feed their families. And many were wearing themselves out by taking second jobs before and after their ATC duty shifts. For example, driving for Uber, and waiting tables. Similarly, they were maxing out their credit cards while making tough decisions such as, “Do I buy gas so I can get to work? Food for my family? Or medicine for myself?”

The NATCA chief also warned that it will be years before we know the full extent of the damage caused by the shutdown. He observed that air traffic controllers take a long time to train. But the shutdown caused many trainees to drop out – and many more to begin reconsidering whether to continue their training. Also, 30% of the existing controller workforce is eligible to retire today. But many had planned to keep working, especially in light of the staffing shortage that already afflicts the NAS. Yet after being “[held] hostage” by “Congress and the White House” (an act Rinaldi compared to “terrorism”), many controllers are reevaluating their retirement plans – or simply deciding to call it quits now.

“Did this cut you deep enough to make you push to find a different way to fund aviation?” Rinaldi asked the crowd of several hundred members of DC’s aviation community. “[We] and the public must demand stable, predictable funding” for air traffic controllers, and the FAA. “Stand up for yourselves – and for the United States!” he said, with real urgency in his voice. After all, the government is only funded until February 15th…