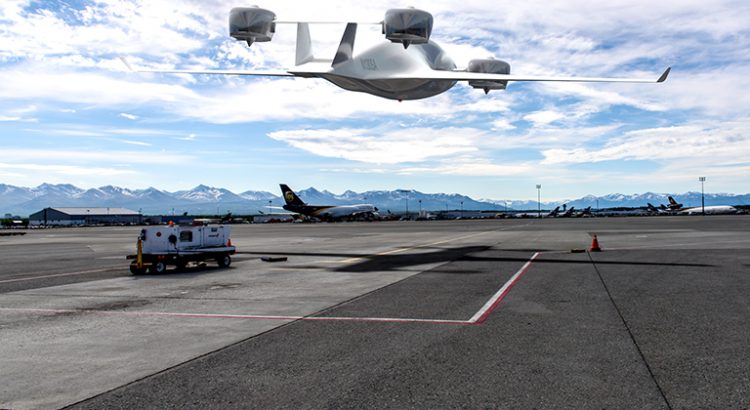 “We had a phenomenal response to our first flight announcement,” said Ed De Reyes, CEO of Sabrewing. “We are meeting our customers’ requests of carrying large volumes of cargo while lifting heavy payloads of weight.”

This September, Sabrewing announced that it had flown its first flight with a record-breaking 829 pound/374 kg payload – the most for any commercial cargo UAV. According to De Reyes, the Rhaegal-A has continued to fly and lift heavy payloads as part of its final development program.

De Reyes continued, “Because we already have the molds, hardware, software and avionics from our first aircraft, we’ve completed the majority of the development work on the Alpha model aircraft. We were looking for a launch customer to start production. ADMC found customers who were interested in buying and leasing the cargo UAV. We had an overwhelming response to our first flight, and interest skyrocketed from day one of the announcement.”

De Reyes added, “On our very first flight, we carried a payload that beat the highest planned payload capacity of the closest competitor by almost 500 pounds, and with over four times more volume than the closest competitors. Since our first payload was only about one-third of what we can carry, we knew it was going to attract a lot of customers who have the need to carry a ton or more of cargo in a large cargo bay.”

Ayman Zeibak, General Manager of ADMC, noted, “We are the first launch customer for the Bravo aircraft, ordering 128 of Sabrewing’s Rhaegal-B “Bravo” aircraft valued at over €768 million. We now have a mix of highly versatile aircraft to lease to our African and Middle Eastern customers.”

Zeibak noted, “The Sabrewing Alpha is just the right size for some of the smaller air cargo companies who don’t have contracts with FedEx, DHL or another major carrier, but have the need to carry 1000 kilos of bulk cargo to remote locations on a regular basis.”

This launch order represents an additional €260 million in revenue for Sabrewing, as well as the launch of an additional product line. De Reyes also said that they expect to begin delivering the first Alpha models for type certification testing by the beginning of the 3rd quarter of 2023.