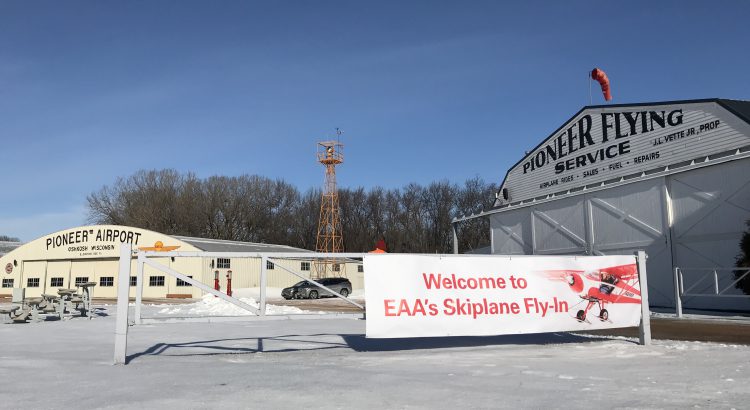 My home away from home is Oshkosh, Wisconsin where every year I travel to the world’s greatest aviation celebration, EAA’s Oshkosh AirVenture. It’s an experience unlike any other, a week-long event that, in short, highlights the newest and greatest in aviation and creates one of the most joyful experiences ever. It’s magical.

I’m not a pilot myself or follow the aviation industry that closely, but that doesn’t minimize my love for watching planes as often as I possibly can. Heck, I intentionally selected an apartment with an incredible view of Regan National Airport just so I could watch planes come and go all day. But what does talking about Oshkosh, my home away from home, in February have to do with anything? Well, for the first time ever I decided to return to Oshkosh in the middle of winter for EAA’s Annual Skiplane Fly-In.

It’s actually a funny story. Right now, I’m in the process of moving cross country from Maryland to Los Angeles due to a job opportunity. My wife and I packed up our lives and began our journey back west on February 3rd. We shipped our possessions that we cared to keep out ahead of us, and are just traveling with our clothes, computers and our two awesome kittycats. While planning our route, in the middle of winter where everyone says go south, I had a flashback come to mind of the cover image from the Jan/Feb 2011 issue of the State Aviation Journal. It was an image from EAA’s 2011 Skiplane Fly-In. Out of curiosity, and only for curiosity’s sake – I swear, I decided to see when the annual Skiplane fly-in takes place. And guess what, it was Feb. 9th, a little less than a week after our move date. 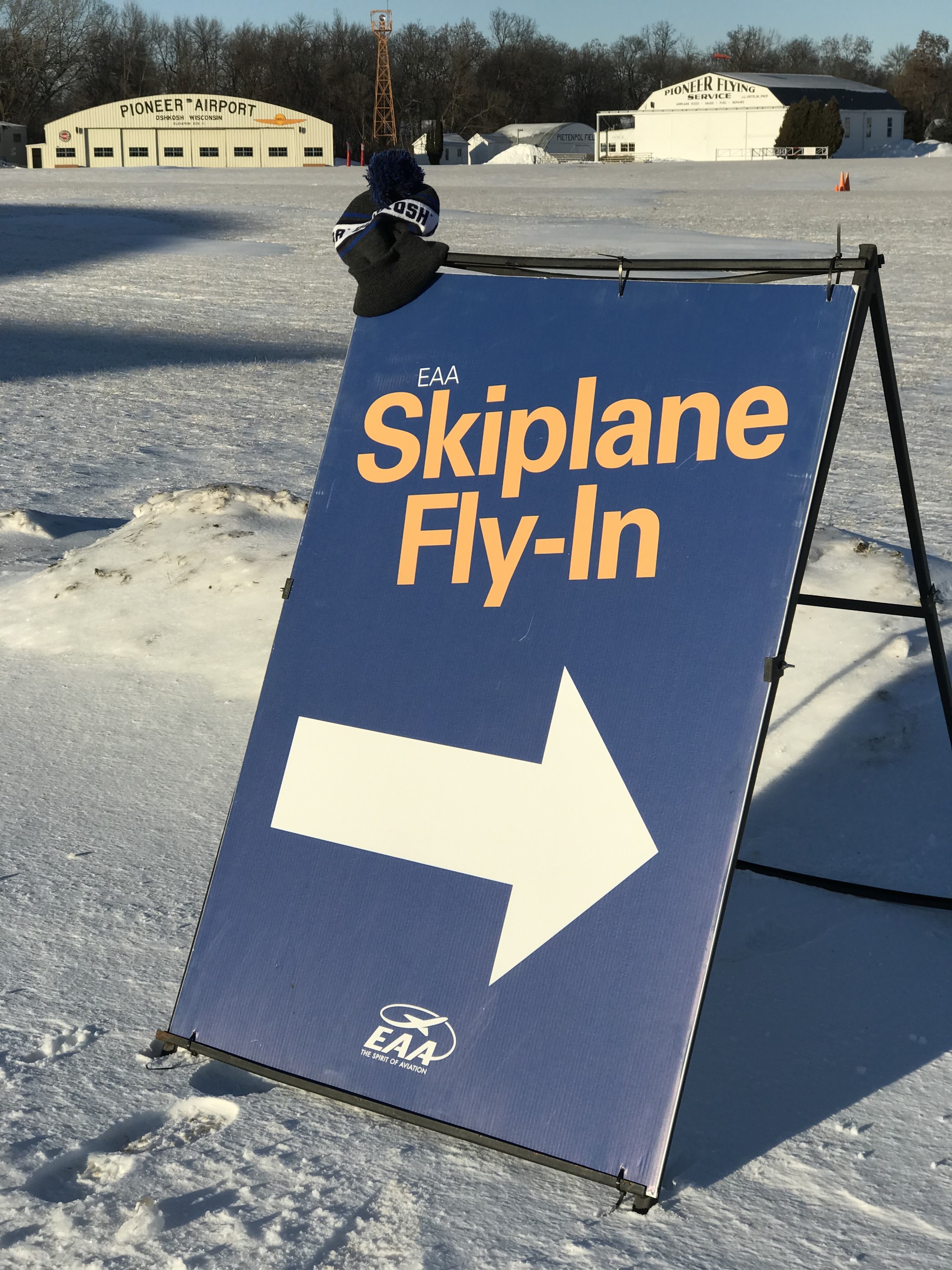 It’s clear that the image from 8 years ago of a Skiplane at my home away from home had a major effect on me to the point that it made a significant impact on our planned travel route. Also, I just recently went through an AirVenture withdrawal faze as I looked over many old photos and videos. But with that said, I love the cold and snow, I love planes, Oshkosh is Oshkosh and my wife is cool with adventuring. So, of course it was time to experience something else I’ve never seen before in person. Skiplane flying!

Upon arrival I quickly made my way over to the airport and took my first stroll around the grounds I’ve walked so many times before during AirVenture. It’s quite an interesting sight to see this time of year. Like everyone in Oshkosh during winter, it’s all bundled up for the winter months. There are icicles hanging from aircraft displays and a snowy, ice glazed crust across the camp grounds with no campers in sight.

It was strange to see the fences and stop signs that secure the airport grounds, where during AirVenture our tickets allow us to pass right through to begin enjoying all the festivities. And with this unique sight to see, at least for me, I still found myself taking many photos of the glossed over grounds. Taking pictures this time of year is more challenging though, because you are a lot faster about lining up the shot so you can quickly put your gloves back on. Brr!

But the main attraction in Oshkosh during February takes place over at Pioneer Airport where EAA’s annual Skiplane Fly-In is hosted. Unfortunately, this year, there wasn’t enough snow, and what was there was iced over. As a result, the Skiplane activity was called off. But that didn’t stop the area from glistening with beauty as the little bit of snow and ice sparkled off the grounds and made it a magical sight to see. Sure, the airways weren’t very busy and no skiplanes were flying that day, but that didn’t freeze out the passion and enthusiasm for flight. My wife and I still enjoyed conversation with attendees and took time to check out each one of the hangars. We also got to warm up with a nice bowl of chili and a warm cup of coffee. An added bonus about this stop was that we finally became EAA members and were able to spend a good amount of time in the EAA Museum – more time than I’ve ever spent there during AirVenture. It was a nice experience to have this time of year and one that we both appreciated.

But in between the conversations and warming up inside the hangar from the single digit temps outside, I still found myself daydreaming of flight. Even though the skies were quiet and no skiplanes were flying that day, I couldn’t help but play out memories in my mind of previous AirVentures. I’m pretty sure I could still clearly hear the helicopters flying over and the jets and warbirds roaring in the skies above. It made me smile instantly to know that the magic of AirVenture surrounds its home no matter what time of year it is. After concluding our first winter trip to Oshkosh, it’s now time to patiently wait and watch the countdown clock tick away the days until #50inOSH. So, as we eagerly anticipate gathering again at the world’s greatest aviation celebration, I’m still happy to have created new memories by getting to see my home away from home in all its winter wonderland glory. Perhaps next year I’ll finally get to see those skiplanes flying. 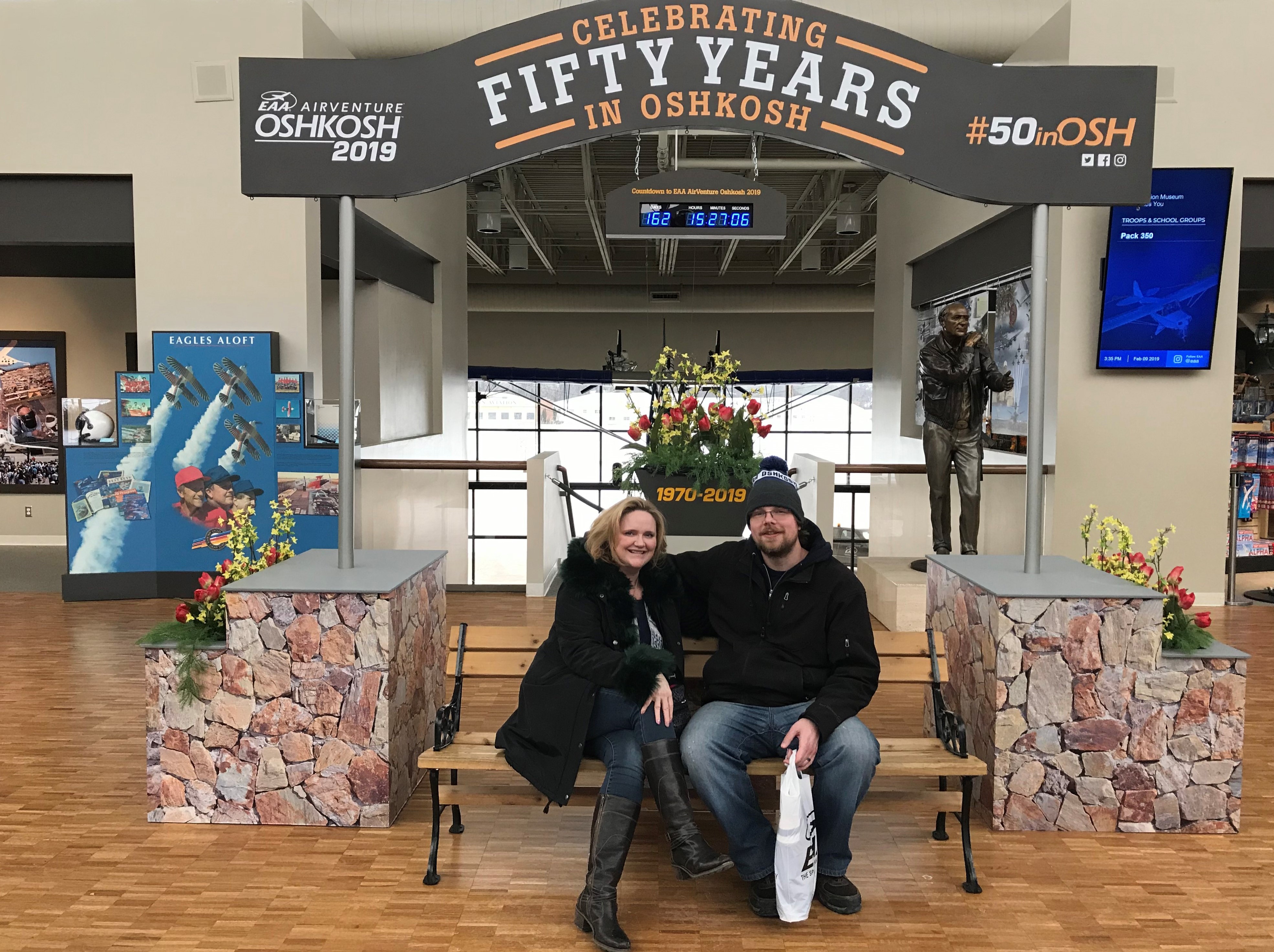