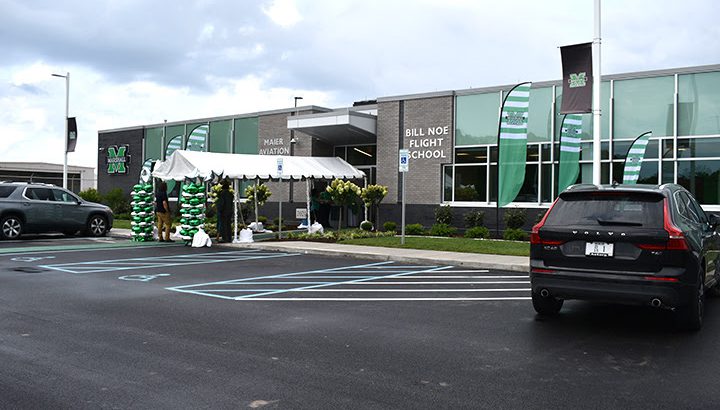 The West Virginia Aeronautics Commission, part of the West Virginia Department of Transportation, played an important role in bringing airport officials, officials from Marshall and the Federal Aviation Administration together to get the project off the ground. In addition, Gov. Jim Justice matched federal funding to help build a road to the facility, which is located on a former runway.

“The Aeronautics Commission played a key role in furthering aeronautic education in West Virginia,” said Keller. “The road opened up all this land for development.”

Boeing and others in the airline industry have predicted the need for tens of thousands of new pilots and aircraft technicians in the next 20 years. Once fully up and running, the Bill Noe Flight School will enroll 200 students a year, and graduate 50 new pilots.

Noe, a Marshall University graduate and lifelong pilot with 15,000 hours of flight time, is chief operating officer of NetJets, the world’s first and largest jet charter service. He has taken an active role in the development of the flight school that bears his name.

Sean Hill said supporting the flight school and Yeager Airport are part of the commission’s ongoing mission to further aviation in the Mountain State.

“This is a great moment for aviation in West Virginia,” Hill said. “I cannot commend Yeager Airport and Marshall University enough for bringing this concept to reality. Just think, a kid could play on the playground at this airport, look up and fall in love with aviation. They get a little bit older and enroll in this flight school, or at one of the technician programs across the state. The circle of inspiring future aviators is coming together with the completion of this school.

“A great benefit of today is that with Marshall University investing the time and resources in an aviation program, other universities and community technical colleges are opening their eyes to the potential at hand,” he said.