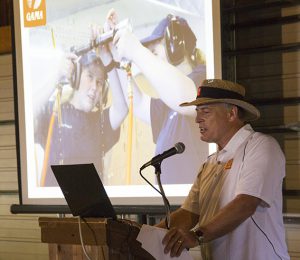 The airplane’s owner Dennis Willows, his daughter Grace, and grandsons Angus and Ian will work alongside the students to build the airplane. In addition, GAMA President and CEO Pete Bunce (shown at right at EAA AirVenture 2015), former Jeppesen CEO Mark Van Tine, and other staff from GAMA and Jeppesen will help oversee construction of the airplane, led by Glasair Aviation staff. The Sportsman is a kit airplane that can be assembled in two weeks through Glasair’s “Two Weeks to Taxi” program. Photos and videos throughout the two-week build will be posted on GAMA’s Facebook and LinkedIn pages.

“Building the Sportsman with our Aviation Design Challenge winners is one of the highlights of the year for me personally and for the GAMA staff,” GAMA President and CEO Pete Bunce said. “Over the past four years, it’s been an incredible experience to watch how very talented and enthusiastic young students develop their skills and increase their confidence in just two weeks as they build an airplane.”

He added, “The general aviation manufacturing industry—which includes manufacturers, engineers, pilots, mechanics, and many others—is facing a shortage of skilled employees in the coming years as a large segment of our current workforce approaches retirement. The Aviation Design Challenge, made possible by our tremendous sponsors, is an important way to share with young people the many career options that exist in aviation and encourage them to consider a position in our industry. We’re pleased to share the experience of general aviation manufacturing with this year’s deserving winners.”
GAMA member companies are sponsoring the team’s travel, lodging, and meals. Former GAMA Chairman Steve Taylor of Boeing will provide the students with a tour of Boeing’s facility in Everett, Washington, as well as the Museum of Flight in Seattle.

“This is always great fun for us,” Glasair Aviation President Nigel Mott said. “Everyone at Glasair Aviation looks forward to sharing what we can about building great airplanes with students who are excited and eager to learn. Who knows? If we do well, some may return to Glasair in time as engineers, A&P mechanics, or composite techs—maybe even company president!”

The competition attracted 76 entries from high schools in 31 U.S. states plus Washington, DC. The schools used “Fly to Learn” curricula and training, including software powered by X-Plane, to learn the basics of aerodynamic engineering. They then applied those principles to modify and fly a virtual Cessna 172SP from one airport to another, delivering a maximum payload in the least amount of time while burning the lowest amount of fuel. Judges from GAMA’s engineering team selected the winning school based on their score from the software, a summary of modifications each team made to the virtual airplane, a checklist of steps involved in the demonstration flight, and three videos submitted throughout the competition, culminating in the students sharing what they learned.