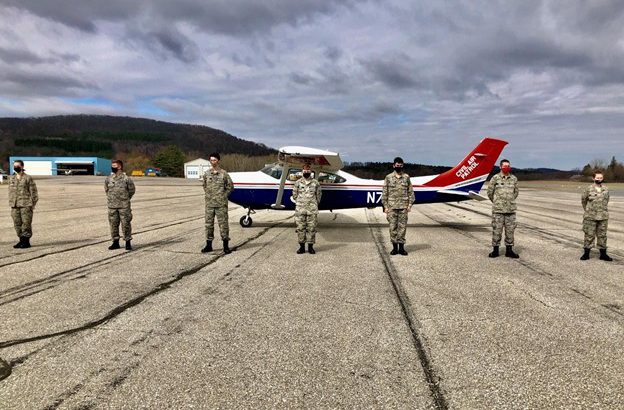 The Bennington Squadron of the Vermont Wing of the Civil Air Patrol has inaugurated a new cadet program, creating new opportunities for local area youth interested in community service, aerospace and STEM (science, technology, engineering, and math) education, and development of leadership and other skills. The new program was launched to meet strong local interest and included seven students from both Mount Anthony Union High School and Burr and Burton Academy, of Bennington and Manchester, respectively.

The squadron, based at William H. Morse State Airport, is now known as the Bennington Composite Squadron. The new name reflects the squadron’s combined membership of both adult members, and cadets – both male and female – aged between 14 and 18 years.

Captain Mercer, Captain Friday and Major Beach welcomed the cadets and their families, then each spoke briefly about the history and purpose of the Civil Air Patrol and specifically about the cadet program and its importance to the Vermont Wing, Bennington, and their fellow Vermonters.

Captain Friday observed: “This ceremony follows a challenging and troubling year. These young men and women before you today took a look at this world and asked for more. More challenge. More responsibility. More opportunity to serve. More opportunity to shine. The stated mission of the Civil Air Patrol Cadet Program is to develop America’s leaders for tomorrow. And make no mistake: these young people are the leaders of tomorrow. I have seen it already, in just two weeks of working with them. These are leaders.

Cadets – I look forward to training with each and every one of you. We will make each other better. I have very high expectations…and I know you will deliver.”

Squadron Commander Captain Mercer said: “I am sure you know that Captain Friday and I, your parents and family, and everyone in the Vermont Wing is hoping that you will all do really well in the CAP and make us proud. What I hope is that the things you do in the CAP make you proud and give you the self-confidence and self-respect to feel that nothing is beyond your reach.”

The new cadets responded in kind.

Cadet element leader Andrea Kaufer said that “I feel really excited for what is to come in the cadet program and I cannot wait to do something bigger in my community. Every time I put on the uniform, I get a surge of pride in myself for joining this program, but also for doing something my dad – who has since passed – also participated in when he was in high school.”

Cadet Andrew Marsden added: “The Civil Air Patrol cadet program…has been an experience like no other. I can already tell that great things will come out of this program.”