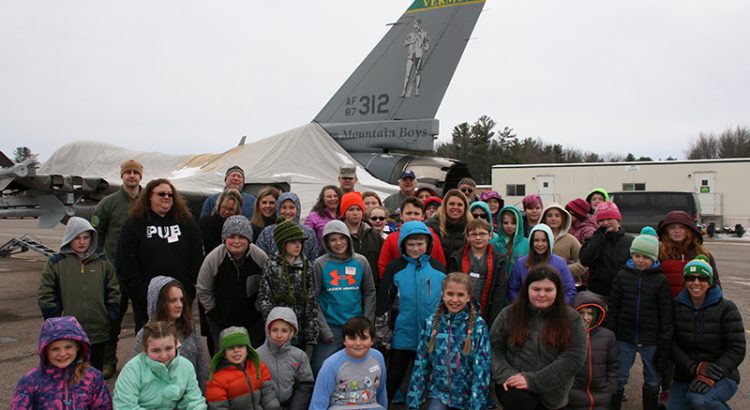 More than 40 fifth and sixth graders from the Orange Center School near Barre, Vermont, enjoyed an extensive introduction to aviation careers and the workings of their local international airport last week.

The tour, organized under by the aerospace education program of the Vermont Wing of the Civil Air Patrol (CAP)  here, afforded the excited students a close look at the Burlington International Airport’s air traffic control tower, a “behind the scenes” tour of ground operations and an informative talk with the general manager of Burlington Airport operations of JetBlue.

The tour ended with a “walk around” (narrated by one of the Guard’s pilots) of a Vermont Air National Guard F-16 “Viper;” and a visit to the personnel, vehicles and other equipment of the Airport’s Fire Department.

The 60,000 members of the CAP, the longtime all-volunteer U.S. Air Force auxiliary, perform search and rescue, homeland security, disaster relief and drug interdiction missions at the request of federal, state and local agencies. CAP plays a leading role in aerospace/STEM education, and its members serve as mentors to over 25,000 young people participating in CAP’s Cadet Programs.

The Vermont Wing of CAP has squadron locations throughout the State, providing critical services and volunteer opportunities for all Vermonters including youth. Visit vtcap.org to learn more.