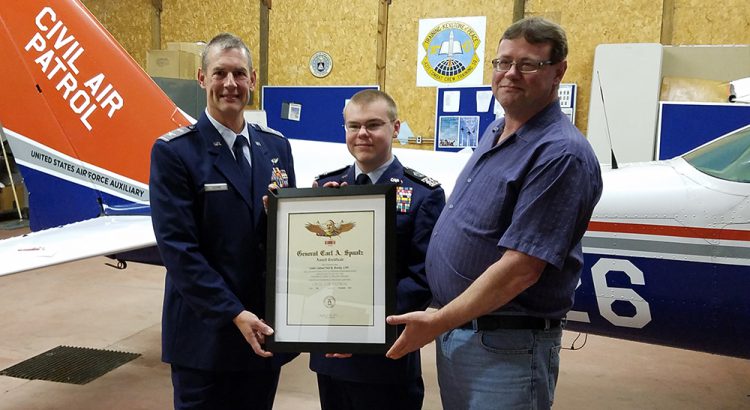 Photo above:  Colonel Rick Lizzari (left), Commander of the Vermont Wing of the Civil Air Patrol; Cadet/Colonel Neil Brooks (center), Spaatz Awardee No. 2213; and Neil’s father, Donald Brooks (right), of Bethel. Cadet/Colonel Brooks received the Award at a ceremony at the headquarters of the Capital Composite Squadron of the Vermont Wing of CAP, located at E.F. Knapp State Airport, Barre/Montpelier.

Neil Brooks of Bethel, Vermont was awarded the Civil Air Patrol’s (CAP) highest cadet honor, The General Carl A. Spaatz Award, becoming the eighth in Vermont to receive the Award since its introduction 54 years ago. The Award is given to cadets who have demonstrated excellence in all aspects of cadet performance: character, leadership, aerospace education and fitness. Only five cadets in a thousand earn the Spaatz Award. The Award was presented to Cadet/Colonel Brooks by Colonel Rick Lizzari, Commander of the Vermont Wing of the CAP, in a ceremony yesterday at the Edward F. Knapp State Airport here.

“Presenting this Award to Cadet/Colonel Brooks allows me the opportunity to formally recognize, and express my appreciation for, his leadership, his hard work and dedication, but most of all serving as a role model to the over hundred other Cadets who serve in the Vermont Wing,” said Colonel Lizzari. “Our CAP community, here in Vermont, wish him continued success as he will soon serve our State and our Nation as an active duty member of the United States Air Force.”

Cadets qualify for this prestigious award after devoting an average of four years to progress through sixteen achievements in the CAP Cadet Program. Along the way they develop self-discipline, a strong sense of personal responsibility, the ability to lead and persuade, and the foundation necessary for pursuing a career in aviation, space, or technology.

The final step a cadet must complete to earn the Spaatz Award is a rigorous four-part exam consisting of a challenging physical fitness test, an essay exam testing their moral reasoning, a comprehensive written exam on leadership, and a comprehensive written exam on aerospace education. Upon passing the Spaatz Award exams, the cadet is promoted to the grade of cadet colonel.

Cadet/Colonel Brooks graduated as valedictorian from Whitcomb High School, in Bethel, in May 2017. He recently received his Associate of Science degree in Business from the Community College of Vermont. Brooks also served on the library Board of Trustees for one year in 2016 and on the Town Meeting Committee in Bethel for almost two years.

Cadet/Colonel Brooks served in a number of roles in his five year tenure with CAP, and was recognized for his performance with successive promotions, including Cadet Commander of the Capital Composite Squadron.  He had also served as officer to support public affairs, supply, communications, and administrative activities both the Squadron and Wing.

Earlier in 2018, during the Wing’s biannual performance evaluation, personnel from the United States Air Force singled out the performance of Brooks, who demonstrated technical and leadership skills as Mission Radio Officer.  Mr. Brooks was awarded the “Northeast Liaison Region Coin” in recognition of his excellence during the evaluation. The review was designed to assess the ability of the Wing and its ground and air crews around Vermont to respond to a wide variety of likely emergencies, including search and rescue, disaster relief and other scenarios.

“I have been very fortunate during my time in CAP, “said Cadet/Colonel Brooks. “CAP has changed my life in ways that I could never have imagined.  Without this Cadet program, I would not be able to say that I did any of the amazing things I have done.”