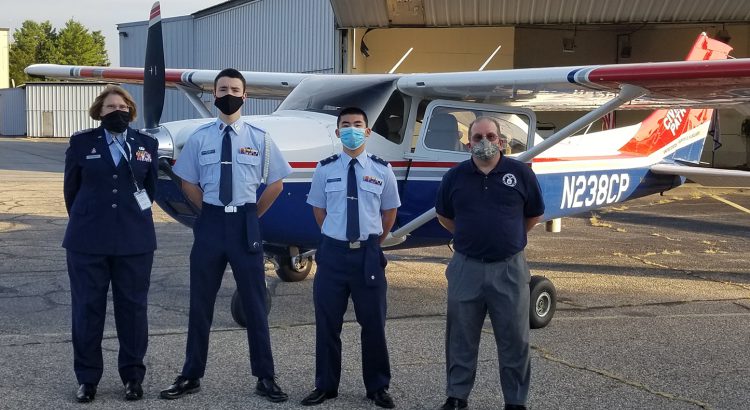 Only 15 percent of CAP Cadets nationwide earn the Mitchell Award. This Award honors the late General Billy Mitchell, an aviation pioneer, advocate, and staunch supporter of an independent air force for America. The Award is the first milestone of the Cadet Program in CAP, and is earned after the completion of the first eight achievements of the Cadet program, which includes physical fitness, character development, and other training.  In addition, the Cadet must pass a comprehensive 100-question examination covering leadership theory and aerospace topics.

“Being able to confer the Mitchell Award to these accomplished, hard-working Cadets is a distinct privilege of being a Wing Commander,” said Col Brechbuhl. “Their leadership skills and work ethic is a credit to their families, the Wing and the entire Vermont community. Well done.”

C/2Lt Masada joined GMCS in December, 2017. He attended CAP Non-Commissioned Officer Leadership School in 2019.  He is serving as Deputy Cadet Commander for Operations in the GMCS.  C/2Lt Masada is home schooled and in the 11th grade.

C/2Lt Smith joined GMCS in April, 2017. He attended CAP Non-Commissioned Officer Leadership School in 2019. Prior to his promotion, C/2Lt Smith served as Cadet First Sergeant for the GMCS    C/2Lt Smith is home schooled, and in the 10th grade.

Squadron Commander 1st Lt Michael French noted that Cadets Masada and Smith have distinguished themselves at every step of their Cadet experience. “This milestone is an indication that both these Cadets are working toward their fullest potential, and setting a terrific example for their peers as mentors and community members. The Squadron is looking forward to benefiting from their skills, and sharing in their future accomplishments.”

The Brigadier General Billy Mitchell Award honors a fearless pilot whose patriotism, foresight, and tenacity surpassed the ridicule he faced. The “Father of the Independent Air Force,” Billy Mitchell led an aerial bombing demonstration resulting in the sinking of the surplus German battleship Ostfriesland in 1921. The Navy had said such a feat would be impossible, and the Army remained skeptical toward airpower. With General Mitchell as their role model, Cadet officers know that speaking truth to power is a moral duty. The Mitchell Award marks completion of Phase II of the CAP Cadet Program, recognizing sustained excellence in all four areas of Cadet life: leadership, aerospace, fitness, and character.

Further, Mitchell Cadets must have passed comprehensive examinations on leadership and aerospace topics and have completed a week long encampment immersing them in a challenging Core Values and STEM environment. The U.S. Air Force respects Mitchell Award recipients’ accomplishments. Mitchell Cadets who enlist in the Air Force enter the service at the advanced grade of E-3, Airman First Class. The service also looks favorably upon Mitchell Cadets when evaluating AFROTC and Academy applicants.