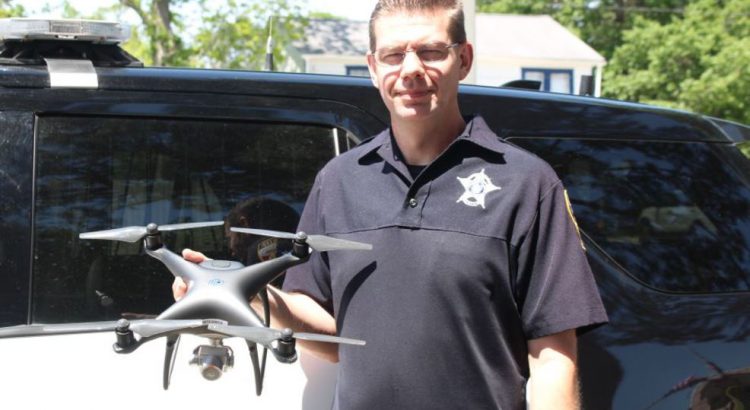 The Liberty County, Texas Sheriff’s Office has joined the growing trend across the United States among both small and large law enforcement agencies in establishing an aviation unit and utilizing the new and growing technology of small Unmanned Aerial Vehicles ( UAV) for a multitude of assignments. The Unmanned Aerial System ( UAS ) that was put into full operation this week has been placed under the command of the Special Operation Division of the Sheriff’s Office after the agency purchased a Phantom 4 Pro Plus small unmanned aircraft with funds secured through court-awarded confiscated drug money.

Sheriff Bobby Rader explains that it has taken several months to get this program up and going. We had to gather the information that was needed to write rules and put together a policy that would address many issues. Once the policy was written we had Liberty County District Attorney Logan Pickett review it to assure it met all local and state legal requirements. The policy was then given to the Policy and Review Committee of the Sheriff’s Office to be certain the policy would meet all agency requirements, goals and objectives and to assure transparency of the UAV operations. The Sheriff went on to say he wanted to make sure the policy would prohibit the violations of anyone’s privacy rights and, in his opinion, that has been done and now additional flight training of both pilots and observers will begin.

It is stressed by Sheriff Rader that the main objectives of this program will be to save lives in the event of a disaster, find lost children and adults and help in the gathering of data needed to investigate a crime scene. The Sheriff said he believes this system has the ability to take away advantages that a tactical shooter may have in a school or commercial area. The Department of Public Safety already uses a system like this to survey fatal accidents as well as several fire departments across the nation to survey areas where there may be hazardous materials and fires so they may plan their strategy.

In November, Deputy Sean Mitchell attended a week long school presented by the Remote Pilot In Command School in Wichita Falls, Texas studying for his FAA examination which covered such subjects as aeronautical knowledge, flight characteristics, weather patterns, how to read aeronautical charts, introduction to law enforcement use of small Unmanned Aerial Vehicles and a multitude of other FAA related requirements. Upon completion of the school and testing by the Federal Aviation Administration (FAA ), Deputy Mitchell earned his “Remote Pilot Certificate” in Part 107 dealing with small unmanned vehicles and is now the Pilot in Command of the Sheriff’s new Aviation Unit.

Dep. Mitchell has already assisted in two high profile cases where photos of the event scene could be critical in a court setting. One was in assisting the DPS in a four car fatal wreck on Hwy. 321 and another where the path traveled by a child later found drowned was flown to determine characteristics of the scene.

The UAV, by FAA regulations, has a height restricted to 400’ so in addition to the pilot there will always be an observer with Dep. Mitchell to help watch for any low flying aircraft, power lines or other nearby obstructions that could create a flight hazard for the small aircraft.

As technology of all kinds continues to move along rapidly in our technical society and more demands are placed upon public service agencies, the growing use of UAV’s in modern police work is a natural progression in investigative techniques just as DNA, polygraph examinations, fingerprinting, computers and so many other devises have been.