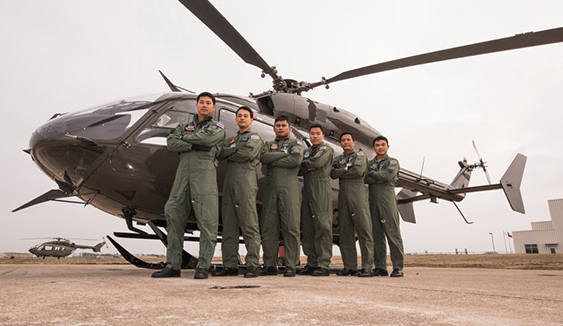 “Our team is honored to have the opportunity to train the Royal Thai Army pilots and technicians to operate the Lakota and perform important missions for their country,” said Marc Paganini, President and CEO of Airbus Helicopters Inc.

Airbus Helicopters has produced six UH-72As for the Royal Thai Army. Those helicopters have been delivered to the U.S. Army, which will later this year transfer the Lakotas to Thailand. The six Lakotas were ordered from Airbus Group by Thailand through the U.S. Army in April 2014, the first foreign military sale of the UH-72A. The U.S. government has offered Thailand the opportunity to purchase an additional nine Lakotas.

“These first deliveries mark the beginning of a long-term partnership in support of this important U.S. ally and our own government,” said Allan McArtor, Chairman and CEO of Airbus Group Inc. “The same flexibility, reliability and cost-effectiveness that prompted the U.S. Army to select the Lakota for so many of its missions makes this aircraft a very compelling offering for many of America’s strategic partners around the world.”

The Lakota was competitively selected in 2006 to fill a wide variety of missions for the U.S. Army and National Guard, including training, search and rescue, medical evacuation, border security, command and control, VIP transport and general utility. The Lakota is also operated in a training role by the U.S. Naval Test Pilot School. The Army, as part of its Aviation Restructuring Initiative, has selected the Lakota as its Initial Entry Rotary Wing Training program at Fort Rucker.

A modern, twin-engine aircraft, the UH-72A is a highly versatile helicopter capable of many missions. As a trainer it is a stable but powerful aircraft that optimally prepares pilots for the cockpit operating environment they will fly in throughout their careers. The Lakota’s glass cockpit is compatible with night vision goggles, and the aircraft is single-pilot Instrument Flight Rules certified. The Lakota continues to have the lowest cost to buy, own and operate of any U.S. military helicopter in production.

Since 2006, Airbus Helicopters has delivered more than 330 Lakotas from the company’s assembly plant in Columbus, Miss. All were produced on time and on budget, enabling Airbus Group to meet all of its commitments to the U.S. government.