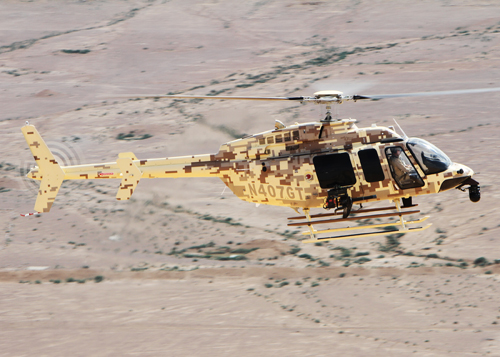 Bell Helicopter, a Textron Inc. company (NYSE: TXT), showcased the full capabilities of the Bell Huey II and the Bell 407GT during a series of demo flights in Jordan and Saudi Arabia in May and June 2014. The Bell 407GT light attack helicopter also completed a successful live fire demonstration in Amman to prove its ability to shoot both precision and non-precision weapons systems. This demonstration was completed in conjunction with L3 Wescam with the MX10 EO/IR Sensor; Dillon Aero with the M134D mini-gun; and featured BAE Systems’ Advanced Precision Kill Weapons System (APKWS.)

“Customers throughout the Middle East and Africa have shown significant interest in the unique capabilities of both the Bell Huey II and the Bell 407GT, and have been eager for a chance to see the aircraft in action,” said Steve Suttles, Bell Helicopter’s managing director of commercial business in the Middle East and Africa. “We were very excited to bring both helicopters to the region to showcase exactly what they can do while operating in their own backyards.”

During the two month tour, Bell Helicopter pilots flew more than 15 total demonstration flights for more than 20 passengers in the Bell 407GT, including the Royal Jordanian Air Force, Royal Jordanian Special Operations Brigade and the Royal Saudi Land Forces Aviation Command. The live fire demonstration was conducted on June 4 in Amman, Jordan in conjunction with BAE Systems and included both the BAE APKWS seeker used on conventional 2.75 inch Hydra 70 rockets and the Dillon M134D mini gun. Highlights of the demonstration included:

· Firing two successful APKWS shots on target, one from 3000 meters while flying at 60 knots and a second at 3300 meters while the aircraft was in a hover; more than 6,000 rounds were also fired from the Dillon mini-gun.

· Completing a successful flight in high temperature conditions (116 degrees Fahrenheit/47 degrees Celsius) with a normal load of passengers, fuel and weapons to simulate typical mission weights and demonstrate the Bell 407GT’s capabilities even at high temperatures.

· Showcasing the aircraft’s ability to fly sniper teams and special operators inside the aircraft while flying at 135 knots, eliminating the need for special teams to be located on the outside of the aircraft, which can reduce airspeed.

“We were very impressed by the Bell 407GT live fire demonstration,” said BG Khaled Hakooz, Flying Wing Commander for the Royal Jordanian Air Force. “My pilots who participated were very impressed with the aircraft and we were also happy to see the proof of final success left behind on our targets despite putting the aircraft in some challenging situations.”

The Bell Huey II was displayed at SOFEX along with the Dillon Aero MFAS (Mission Flexible Armament System.) Its cross-cabin floor plate system provides a strong foundation for mounting both internal and external weapons stations and swings out of the way when not needed. This ensures that no physical modifications to the airframe are required for different mission requirements. The Dillon MFAS allows for numerous configurations utilizing any combination of both fixed-forward and outboard weapons/storage locations along with internally mounted crew-served weapons.