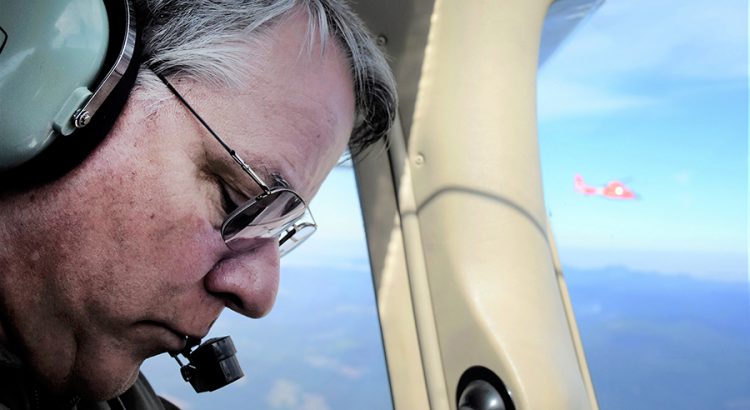 After the fighter intercept, U.S. Coast Guard crews from New Jersey in Dolphin HH-65 helicopters from California took over because the helicopter is better able to match the Cessna 182’s speed.

CAP planes and pilots fly as a “track of interest” to let fighter pilots hone their intercept skills. Fighter jets usually slow down to land at 120 mph — the cruising speed for many single-engine general aviation aircraft.

The Oregon Wing pilots are helping with this week’s CrossTell 2018, an exercise sponsored by Continental U.S. North American Aerospace Defense Command Region in coordination with the Western Air Defense Sector, to spread the word about this type of training and also to remind pilots everywhere to check Notices to Airmen for temporary flight restrictions and to fly informed.

The list of participating agencies is long. It includes the Air National Guard, Coast Guard, U.S. Customs and Border Protection and the U.S. Secret Service. An example of the interagency participation came when a CAP Cessna 182 landed at Portland International Airport after an intercept sortie; parked next to them was a Cessna 182 piloted by two members of NORAD based out of Peterson Air Force Base, Colorado. In that aircraft were retired Air Force Col. Al Wimmer and Royal Canadian Air Force Lt. Col. Dave Turenne. One of the passengers on their flight observing the intercept was Staff Sgt. Candice Davis, an aircrew flight equipment specialist with the 142nd Fighter Wing.

Wimmer and Davis both got their start in aviation when they joined Civil Air Patrol. Davis belonged to CAP’s Alaska Wing before serving in the Oregon Air National Guard, while Wimmer started in CAP in Roanoke, Virginia, and later spent 28 years in the Air Force.

“CAP has been a part of my life for a long time,” Wimmer said. “My experience in CAP motivated me to go to the U.S. Air Force Academy and become a pilot.” He worked his way up to be the director of operations for 1st Air Force at Tyndall Air Force Base, Florida, before retiring.

Capt. Mark tenKate, CAP mission observer, stepped out of the aircraft grinning from ear to ear.  Asked how the flight went, he took a deep breath and said, “Compared to flying search and rescue sorties, being intercepted by fighter jets and helicopters is more of an adventure and much more fun.”

CAP aircrews volunteer their time to participate in this type of intercept training. They train frequently to their own high national standards and to Federal Emergency Management Administration standards for search and rescue participation.

Civil Air Patrol, the longtime all-volunteer U.S. Air Force auxiliary, is the newest member of the Air Force’s Total Force. In this role, CAP operates a fleet of 560 aircraft, performs about 90 percent of continental U.S. inland search and rescue missions as tasked by the Air Force Rescue Coordination Center and is credited by the AFRCC with saving an average of 80 lives annually. CAP’s 60,000 members also perform homeland security, disaster relief and drug interdiction missions at the request of federal, state and local agencies. In addition, CAP plays a leading role in aerospace/STEM education, and its members serve as mentors to over 25,000 young people participating in CAP’s Cadet Programs. Visit www.GoCivilAirPatrol.com or www.CAP.news for more information.