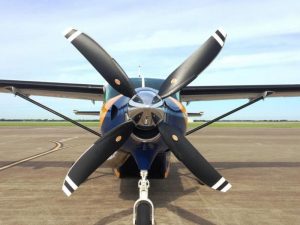 In the past year, Hartzell Propeller has expanded its global reach across the spectrum of general aviation’s propeller equipped aircraft. Through a multiyear, multimillion dollar investment in advanced aerodynamics and manufacturing techniques using state-of-the-art composite and aerospace grade materials, the company today reigns as the industry leader as it begins its second century of propeller making.

“By focusing our attention on large fleets of turboprops and piston-driven aircraft, Hartzell continues to develop the highest performing and most up to date propellers that can be found anywhere on the planet,” said Hartzell Propeller President Joe Brown. “These investments are paying off in real-world performance increases for OEMs, and owners and operators that choose to fly Hartzell props,” he added.

On Display at EAA AirVenture in Oshkosh

Many of these developments will be on display at Hartzell Propeller’s Booth 296-297 at the 2017 Experimental Aircraft Association’s AirVenture Oshkosh 2017, July 24-30.

At EAA, Hartzell Propeller will be celebrating a significant milestone – 100 years of building propellers, beginning with the wood propellers for the Wright Brothers, and culminating with the most modern and reliable high performance propellers available in 2017. That experience, built over the years in manufacturing and supporting more than 500,000 props for many aircraft types, is reflected in the company’s underlying foundation of Built on Honor.

On exhibit at AirVenture will be Hartzell’s 2-blade composite Trailblazer, 3-blade Bantam and Raptor applications, 4-blade aluminum and composite options, and 5-blade carbon fiber propellers for various aircraft models. Hartzell Propeller has been active since the 2016 EAA AirVenture with a number of developments, including:

This Hartzell and Texas Turbine collaboration links engine upgrades for converted Cessna Caravans with Hartzell’s structural composite propellers especially engineered for the Supervan 900. The 110-inch diameter propeller, which is 60 pounds lighter than the prop it replaces, blends advanced aerodynamics and sophisticated manufacturing processes to increase performance and deliver extraordinary reliability.

Hartzell Propeller’s 83-inch composite Trailblazer propeller has received an STC for Super Cub PA-12 and PA-18 aircraft. Hartzell Propeller worked closely with Professional Pilots Inc., which owns the STC, and is marketing the conversion program from its Lowell, Ind. facility.

CubCrafters selected the Trailblazer as standard equipment on its newest Flagship the XCub. Trailblazer props are lighter, faster and stronger than any competitor. The unlimited life Hartzell Trailblazer features a field replaceable nickel-cobalt leading edge, ensuring it can withstand demanding backcountry and bush flying.

Hundreds of single-engine Cessna Caravan 208 aircraft are now eligible for conversion to 3-blade aluminum props from Hartzell Propeller through an amended STC. The propeller is available with a TKS ice protection system approved for Flight Into Known Icing (FIKI).