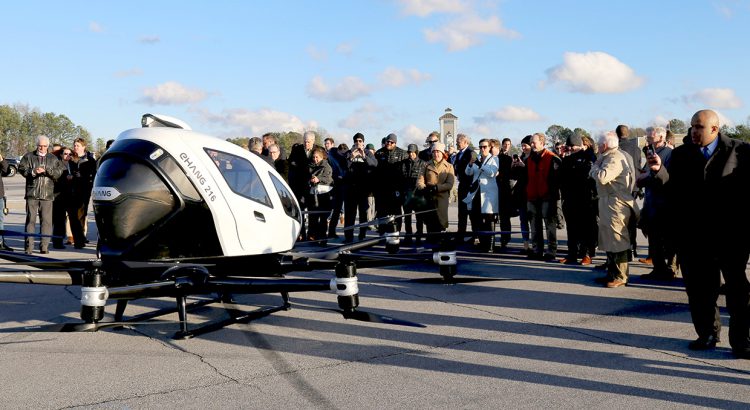 The autonomous aerial vehicle flew in front of a crowd gathered at the State Highway Patrol Facility/Aviation Hangar in Raleigh. It took nine months of work overall to make the flight happen, and according to NCDOT, they needed every day of it- approval didn’t come until the morning of the flight, and weather was a concern until minutes before takeoff.

“Our staff worked hard over the last few months to make this a reality,” said Walston. He and his aviation division staff had to first identify a partner, who ended up being eHang, to provide an aircraft. Once that was set, they started the long planning and permitting process – the event itself was categorized as an air show, so they needed all the related safety measures like fire department coverage and crowd control, as well as Federal Aviation Administration (FAA) certifications and approvals. “Making aviation history isn’t easy,” said Walston.

Due to FAA guidelines, Tuesday’s demonstration flight was unmanned, but the EH 216 can carry two adult, non-pilots. The autonomous aerial vehicle is designed to function as a taxi service delivering people on pre-programmed routes. The aircraft has been flown in other parts of the world, but it has never been demonstrated for the public in North America.

In 2019, the state helped launch the first-ever commercial drone delivery service, shipping medical samples and supplies at Raleigh’s WakeMed Hospital. The N.C. Department of Transportation has won numerous awards in recent years for its groundbreaking use of drones to expedite the response and recovery efforts during Hurricane Florence.

The flight demonstration came just before the 2020 North Carolina Transportation Summit, and brought together stakeholders to discuss transportation safety, funding and new and disruptive technologies.