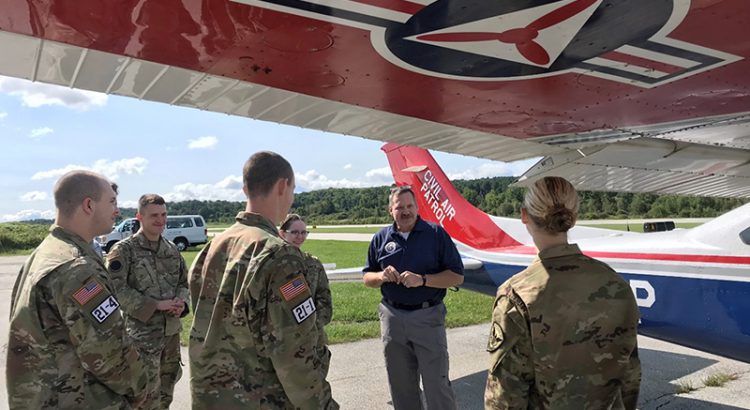 Thanks to the collaboration of pilots and support personnel from both New York and Vermont Wings of the Civil Air Patrol (CAP), a number of cadets from Air Force ROTC Detachment 867 at Vermont’s Norwich University were recently able to participate in a series of orientation flights over Vermont. The two Wings conducted a record 36 hours of flight time over a day and a half; and fulfilled a critical CAP mission of stimulating interest in aerospace among younger Americans.

A total 34 Norwich University AFROTC cadets, and two from CAP, participated in the orientation flights.

The sorties were based out of Vermont Wing’s Capital Composite Squadron at Edward F. Knapp State Airport here. The airport is near Norwich University, which is located in Northfield, Vt. The Norwich University detachment of the AFROTC is commanded by USAF Col Mark Ceiro.

Captain Joseph Bosley, Commander of the Capital Composite Squadron, noted: “The hard work by both Vermont and the New York Wing resulted in one of the biggest airborne exercises in our Wing’s history. The AFROTC cadets greatly appreciated their experience in the hands of our NYWG and VTWG CAP pilots, and I think both Wings benefitted from a gratifying, educational experience.”

Orientation flights, which are also available to CAP cadets, enable participants to experience flight from the front seat of a CAP aircraft. In addition to experiencing flight, cadets received multiple briefings on CAP history, overviews of recent missions, as well as a “pilot’s eye” review of airport operations, charts, radio communications, and aeronautical decision making—all with an emphasis on safety.

Capt. Bosley cited the following CAP officers for their support and professionalism: