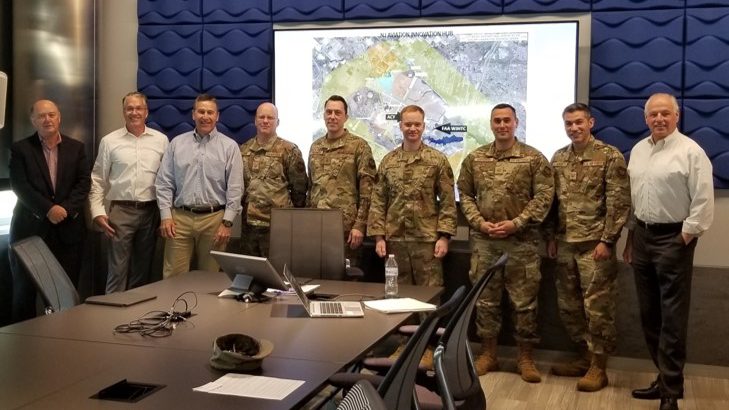 Photo above – Representatives of Embry-Riddle Aeronautical University, the Atlantic County Economic Alliance from New Jersey, the U.S. Air Force, and the National Aerospace Research & Technology Park gather to finalize a memorandum of understanding to conceive and build the Aviation Academy of the Future at the NARTP’s first building in December of 2021.

The Aviation Training Academy of the Future will be located within New Jersey’s Aviation Innovation Hub, just 10 miles northwest of Atlantic City, as long as a unique partnership among industry, government, military, and academic leaders can bring the dream to fruition.

With next-generation commercial aircraft on the drawing boards of manufacturers around the world and the rapid growth of unmanned aerial systems (UAS or drones) and advanced air mobility (AAM or air taxis), now is the time to imagine and build the Aviation Training Academy of the Future (ATAF).

In December of 2021, a memorandum of understanding (MOU) was signed by representatives of the Atlantic County Economic Alliance (ACEA), Embry-Riddle Aeronautical University, and the U.S. Air Force 305th Maintenance Group of Joint Base McGuire-Dix-Lakehurst to work together to develop the ATAF. The hybrid academy will provide traditional Part 147 aviation maintenance technician training while also preparing students for skills needed in emerging technologies, including Unmanned Aerial Systems and Advanced Air Mobility technologies.

Following the signing of the MOU, the Air Force 305th Maintenance Group hosted ACEA, Embry-Riddle, and Federal Aviation Administration (FAA) officials on January 26, 2022, to brainstorm the ATAF and tour the aviation maintenance operations at Joint Base McGuire-Dix-Lakehurst, N.J.

“By bringing this world-class, leading-edge aviation training academy to Atlantic County, we are joining forces with some true ‘heavyweights’ to broaden and diversify our regional economy,” said Lauren H. Moore, President of the ACEA. “At the same time, we are adding another critical component to our Aviation Innovation Hub, as the Aviation Academy of the Future will be neighbors with the William J. Hughes FAA Technical Center, the Atlantic City International Airport (ACY), and the National Aerospace Research & Technology Park.”

The ACEA is working closely with the South Jersey Transportation Authority, which oversees operations of ACY, to develop air cargo and aircraft maintenance and repair operations at the airport, which is a Smart Airport Testbed facility. The success of these operations will be dependent on the availability of a skilled workforce and the ATAF can help to fill that need.

The ATAF will train students, both U.S. Air Force personnel and civilians, for career opportunities within the aviation industry, ranging from aerial port, supply chain management, cargo, and unmanned aerial systems. Plus, students will learn skills that are transferable to the repair and maintenance of wind-energy turbines, which will be critical to meeting the state’s clean energy goals.

Further differentiating the ATAF from traditional Aircraft Maintenance Technician Schools, Embry-Riddle is considering the incorporation into the academy’s curriculum of “green” trends in aviation, including sustainability, electrification of propulsion systems, developments in battery technology, the use of composite materials in aviation, and the importance of cyber security to protect aircraft from hacking threats.

U.S.A.F. Master Sgt. Austin Barkdoll, 305th Maintenance Group senior process manager, sees the ATAF as an opportunity for the Air Force to share best practices with their civilian industry counterparts about how each party equips, maintains, and operates aircraft.

“We can take those best practices and see if it would be a good fit in the Air Force and Department of Defense. Likewise, our civilian partners can take our best practices to learn how we train and maintain,” said Barkdoll, who added that the benefits don’t end there. “A really important part of this partnership is developing a new method and a new style of teaching, leveraging new technologies like virtual reality and augmented reality to teach maintainers faster and with more information.”

FAA Research and Development Management Division manager Jon D. Schleifer was among the officials who attended the planning session at Joint Base MDL in January. “The meeting was pivotal as it showcased how the government is innovating with industry in an effort to train future Airmen and maintenance technicians in a manner that benefits New Jersey and our national aviation system. It is our desire to participate in innovative approaches to enhance an aviation workforce of the future.”

FAA regulations dictate what Aircraft Maintenance Technician Schools teach aspiring aircraft mechanics. The FAA is aware of the need to both modernize the training of aviation maintenance skills while developing curriculum to advance the incorporation of drones and air mobility technology into the national airspace system. The fact that the ATAF could be taking flight next door to the William Hughes FAA Technical Center in NJ’s Aviation Innovation Hub, where FAA researchers can have an active hand in its development only improves the project’s chances to come to fruition in the near future.

To date, Embry-Riddle has completed an initial planning study for the ATAF. The plan includes recommendations for curriculum and other elements needed to create a state‐of‐the‐art facility. In this capacity, Embry-Riddle will work closely with Atlantic Cape Community College, which operates an aviation program and will also be a partner in the ATAF project.

The results of the Embry-Riddle study could be used to secure additional funding to cover the capital costs of constructing the ATAF.

Earlier this year, the ACEA submitted a request for a $5 million congressional appropriation to be used for design and construction activity on the project. A preliminary cost estimate to construct the 40,000- to 50,000-sq.-ft. facility is $15 million.

With or without the congressional appropriation, additional monies needed to complete the project in future years will come from a variety of potential sources, including government grants, a local Opportunity Zone investment group (the Aviation Innovation Hub is located with a federal Opportunity Zone and within New Jersey’s only designated Aviation District), and industry partners, some of whom have provided letters of support.

The Air Force is one of many entities, both public and private, with aircraft maintenance training needs that could be met by the proposed academy. There is currently a growing shortage of aviation maintenance workers in the United States with the bulk of the current workforce approaching retirement age. Boeing estimates nearly 120,000 new technicians will be needed in North America over the next two decades, predicting ongoing strong demand for aviation industry jobs during that time.

Many of the aviation companies that would benefit from the advanced technology training being considered for the curriculum of the ATAF are also among the top prospects to occupy the 58-acre National Aerospace Research & Technology Park (NARTP), which is also located within New Jersey’s Aviation Innovation Hub. That synergy has not been lost on NARTP President Howard Kyle, who has been an active participant in the planning meetings for the ATAF. The first of seven multi-story buildings that will comprise the NARTP is fully occupied and groundbreaking for a second building will take place this summer.

“This effort benefits the U.S. Air Force, the future maintainers of aircraft, and southern New Jersey,” the FAA’s Schleifer said. “Each partner has a motivation for pursuing shared success: however, when our interests align, we can move forward, farther, and faster to benefit all… We all are seeking to build an aviation workforce for the future.”