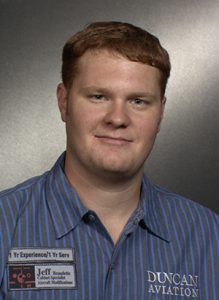 Duncan Aviation announced that Jeff Beaudette has joined the Modifications and Completions Sales team in Lincoln, Nebraska. In the 20 years Beaudette has worked at Duncan Aviation, he served as a Cabinet Specialist and Team Leader before transitioning to the Engineering & Certification Department.

For the last several years, Beaudette served on the Alterations Planning Team, where he provided guidance to the Sales, Engineering and Production teams. One of his primary responsibilities was reviewing sales proposals for large and complex interior reconfiguration projects to ensure that there is a return-to-service path for the aircraft.

“My previous positions in Production and Engineering have demanded a high level of engagement and commitment, whether I’m assisting fellow team members or clients,” says Beaudette. “I’m confident those skills will assist clients in planning for their aircraft modifications.

Beaudette and his wife Melissa have been married for 11 years and have four children: Chase, Keaton, Abbie and Ella. As active parents, they encourage their children to participate in competitive sports, and Beaudette and his wife can frequently be found in the stands, cheering on their kids as they swim or play softball and football.

“Jeff is a self-starter with a positive, solution-based attitude who has been a valued employee in his years at Duncan Aviation,” says Manager of Completion and Modification Sales Nate Klenke. “He’ll be a great addition to our sales team. We’re excited for him to join our team where he’ll use his years of knowledge and experience to support our diverse client base.”