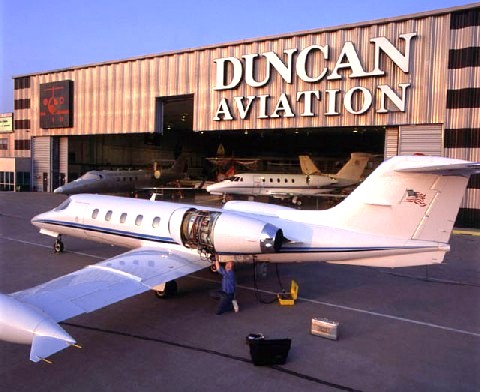 Duncan Aviation is the largest family-owned aircraft support facility in North America. That statement is much more than bragging rights. And the key word in the sentence is family. The people are the reason Duncan Aviation is what it is today, and those talented and tenacious team members who come to work every day are the reason the company’s Lincoln, Nebraska, facility is celebrating its 50th anniversary this month.

A half a century is certainly a benchmark, especially in the modern aviation industry, which isn’t much older. It was on December 5, 1963, that Donald Duncan incorporated Duncan Beechcraft-Lincoln. Though the name has changed, the number of locations has grown, and those 12 employees have turned into more than 1,200, one thing remains the same: Duncan Aviation-level quality.

From a family farm, selling surplus government airplanes and car dealership in Clarinda, Iowa, to a Beechcraft distributer in Omaha, Neb., Donald saw prospects everywhere. He started the roots of Duncan Aviation in Omaha in 1956. And when he decided to open a second facility in Lincoln in 1963, he chose the location because he saw opportunity within the community. That fortuitous decision has grown into a world class facility with small town values.

If you ask any team member how long he or she has worked for Duncan Aviation, the majority answer in years, many in decades, because many of those who start a career at the company decide to stay. The company celebrates each employee’s anniversary and has a special group of team members who have dedicated 25 or more years to the company. More than 100 belong to this Silver Wings Club.

“Experience is vital in this business, so we want our employees to like what we offer and how we do business; we want them to make careers at Duncan Aviation,” says Robert.

To ensure a happy, healthy workforce, the company recently opened Duncan Aviation Family Health. This addition aligns with the wellness program, which has been part of the company culture for more than a decade.

Duncan Aviation also focuses heavily on the community and giving back through volunteerism, as well as through the United Way donation program. Investing in the team and community has proven to be a solid expenditure, and in coordinating with the company’s nine core values, which include honesty, respecting others, offering positive suggestions, among others. The company’s leaders have created an environment that’s unique to a business this size. Team members enjoy one another, their customers and the management team.

As Duncan Aviation operates under the direction of its third Duncan family member, Chairman Todd Duncan, it’s clear the family-first ethic starts at the top, and that ethic is now an entrenched part of the Duncan Aviation culture.
“My grandfather would be proud of the fact that Duncan Aviation is not based on one individual’s efforts, but on a dedicated team of aviation enthusiasts,” says Todd.

A Glimpse Into the Future

The past 50 years haven’t been a worry-free journey. Duncan Aviation has certainly seen its share of transitional turbulence with the ebb and flow of the economy, but the company is bigger and arguably stronger than it has ever been. The Lincoln facility’s façade is changing as it constructs 175,000 square feet of hangar and office space to house larger aircraft alongside its already impressive collection of buildings and hangars that line the Lincoln Airport.

But a list of the extensive ratings, certifications and approvals, and infrastructure as well as the legion of employees do not do the company justice. More importantly, Duncan Aviation is a family business with strong, Midwestern values it extends to both customers and employees.