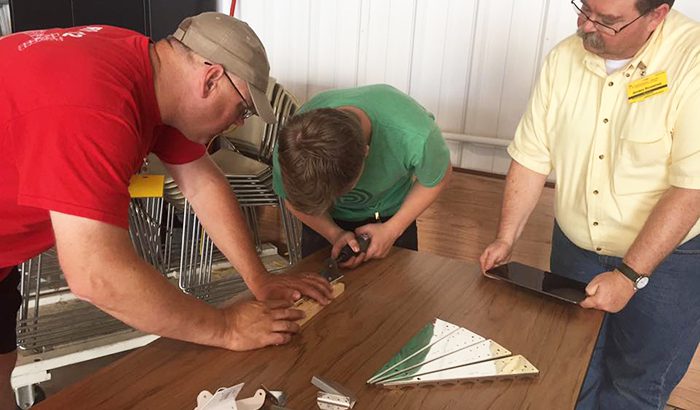 Recently, David Moll, Nebraska Division of Aeronautics PIREPS editor, featured a story on AviationNation Omaha (www.aviation.nation.omaha on Facebook) writing, “I think this is one of the most important aviation programs aimed at the youth today. Their motto ‘Mentors build students, students build the airplane’ is what aviation needs because hands-on education in aviation does not come from being heads down on smart phones.”

Jim Beyer, Chief Mentor, along with a strong volunteer team of wife, Trina, LeeAnn Vaughan, Bob Condrey, Mike Howard, Craig Tylski, and Bob Cartwright, and National Director for AviationNation, Bob Kelly, are very busy building with students at donated hangar work space from Oracle Aviation on Millard Airport-KMLE. “We tell our sponsors our purpose is PRIDE which is the acronym for Personal Responsibility In Daily Effort. Skills as safety, teamwork, project and time management, trade skills, and STEM are learned through doing. What is more exciting than building an airplane like the RV-12?

“Our Omaha program is new but AviationNation is a national program www.aviationnationinc.org which started in Indiana. It is an approved IRS 501c3. As an airline pilot, I see the need for skilled workers to keep aviation healthy as an industry,” said Beyer.

Mike Rowe of the television show, Dirty Jobs, which often highlights the ever widening skills gap in the trades across America, influenced the Omaha-area mentors to launch their program. Because they are building an actual airplane, the project is dependent on donations and sponsors.

AviationNation has locations building students not only in Omaha, Nebraska, but in Columbus and North Vernon, Indiana, San Antonio, Texas, and Nashville, Tennessee. Mentors are key to the success because you do not have to be a pilot to get on board with this innovative program. According to Van’s Aircraft, “Building a RV does not require any special skill, but it does demand attention, commitment and perseverance!”

Beyer explained, “And, our mentors help in other ways-taking photos and posting on social media sites, monitoring attendance and training records, shipments, keeping donors and sponsors informed. Our focus is always on the student. But, mentors grow and learn, too.”

When asked why not build a boat or a car? Beyer chuckles and says, “Even though airplanes have been flying for nearly 114 years, aviation offers magic and excitement which attracts all ages.” How true. Aviation has a special allure which can capture young minds and hearts.

As the famous WWI ACE, Eddie Rickenbacker, said, “Aviation is proof that given the will, we have the capacity to achieve the impossible.” AviationNation Omaha is proving building an airplane with students and mentors is possible. That is why it is now thriving in America’s heartland.