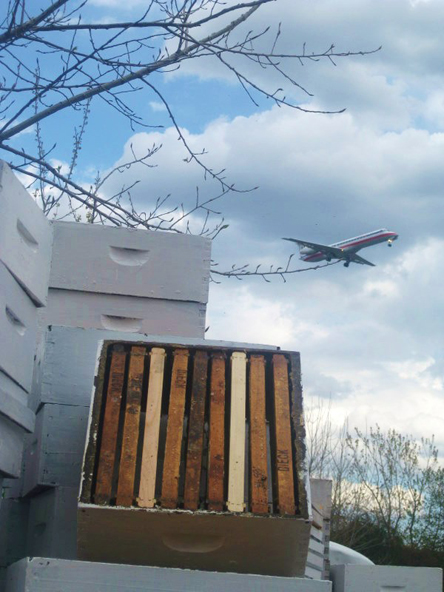 Something different can be seen around Chicago’s O’Hare International Airport – apiaries. Since May 2011, the Chicago Department of Aviation (CDA) has partnered with the North Lawndale Employment Network (NLEN) with the operation of 33 apiaries, or bee hives, at a remote location off of one of the terminals at O’Hare – making O’Hare the first airport in the U.S. to have apiaries.

As stated on its Web site, “The mission of NLEN is to improve the earnings potential of North Lawndale [a neighborhood on the West Side of Chicago] residents through innovative employment initiatives that lead to economic advancement and an improved quality of life.”
In 2004, NLEN Executive Director Brenda Palms Barber had an idea to develop a honey business and Sweet Beginnings LLC’s beeline® skin care products and urban honey was born. Sweet Beginnings is a wholly-owned subsidiary of NLEN. This program assists ex-offenders and other residents of North Lawndale, an impoverished neighborhood in Chicago, find permanent jobs.
According to Barber, Sweet Beginnings has provided approximately 211 transitional jobs to exoffenders. “Less than four percent
of Sweet Beginnings employees have returned to prison, which is key – this shows that we [NLEN and Sweet Beginnings] can create first rate products and employees,” Barber proudly explains.
The national average recurring rate, or recidism, rate is 65 percent, so four percent is quite an achievement.   “This partnership between O’Hare and North Lawndale is a win-win situation because it’s a socially responsible program, it’s fiscally responsible and it shows that we’re [O’Hare] a part of the community. It is important to support our own,” explains CDA Commissioner Rosemarie Andolino.
In 2005, Sweet Beginnings began selling beeline products at local farmers markets and by 2007 several local Whole Foods stores were selling beeline products. It was recently announced that Whole Foods stores throughout the Midwest will offer beeline products. The excellent reputation of these products spread by word of mouth until David Robbins and Amy Mallard of the CDA approached NLEN after learning about this sustainable business initiative.
“Having bee hives at O’Hare is an honor and a dream come true. We are creating jobs for those who have a difficult time
finding jobs and using land in a ‘no fly zone’ at the airport for something productive,” explains Barber, who is also the Chief Executive Officer of Sweet Beginnings. Bees have become scarce in the United States over the past decade due to climate
change, use of antibiotics and disease.
The apiaries are located in the perfect spot – outside the runway protection zone, which means federal regulations prevent development. Andolino also notes that the bee hives are located discreetly at the airport, so the bees are not aggravated. In only six months the program has been a huge success and there is already speculation to expand this partnership. There has also been an interest to use this “urban honey” in the concession and restaurants at O’Hare. Oftentimes urban honey is more
flavorful than rural honey because urban bees have access to different pollen trees.
“When we developed this program and decided to establish apiaries at the airport we worked closely with the FAA [Federal Aviation Administration] to ensure that it [the bee hives] met regulations. We also worked closely with a USDA [United States Department of Agriculture]-certified biologists to ensure there weren’t any hazards to wildlife,” comments Andolino. (Shown at right)
Bee hives are not the only environmentally-friendly initiative for the nation’s fourth largest airport. The CDA is well-known throughout the aviation industry for its development of the Sustainable Airport Manual, “…which guides the implementation of sustainable initiatives at O’Hare and Midway International airports and has served as a guide for other airports.”
Some sustainable projects at O’Hare include :
• Recovered and reused 95 percent of all concrete,
asphalt and dirt on-site, diverting from landfills and realizing almost $3 million in savings.
• Over 32,000 square feet of green roofs in place todate, including Mt. Prospect Road guard post, South Airfield Electrical Lighting Control Vault, and the first green
roof on an FAA Airport Traffic Control Tower building in
the country.
• Replacing 154 acres of low quality, inaccessible
wetlands currently on airport property with nearly 450
acres of higher quality wetlands throughout the region.
So, even though it may seem strange, apiaries at O’Hare makes sense – both for the environment and for O’Hare’s sustainability efforts.
Attachment: