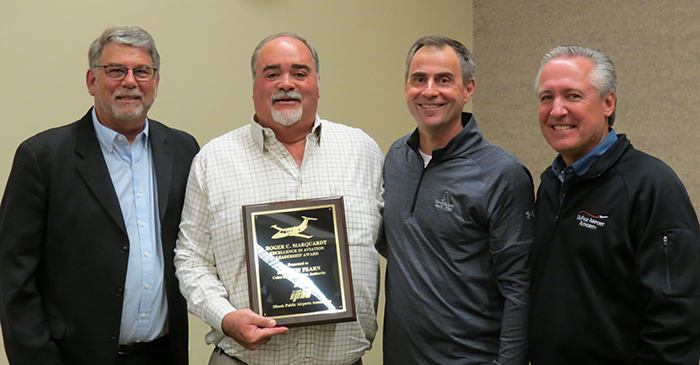 Reflecting the importance and vitality of the state’s aviation system, six airports have received Airport of the Year awards from the Illinois Department of Transportation. The awards were presented recently during the Illinois Public Airports Association Fall Conference in Galena.

“Aviation is vital to our state’s economy and a pillar of our multimodal system that makes us the North American transportation hub we are today,” said Illinois Transportation Secretary Omer Osman. “Our aviation partners support a variety of industries and make numerous contributions to enhance the quality of life in Illinois. We present these awards as tokens of recognition and gratitude for their efforts.”

The facilities were selected because of their accomplishments, including an outstanding partnership with IDOT and a strong commitment to customer safety and satisfaction. Among the award considerations are cooperation and coordination with the state, safety record, maintenance of the facility, and promotion of aviation and educational events.

Illinois is home to 100 public-use airports and heliports, with nearly 3,000 aircraft registered with the Federal Aviation Administration. The system of airports supports more than 492,000 jobs, with a combined payroll of $21.9 billion and a total economic impact of $95.4 billion. Across the state, there are over 700 aviation facilities, including heliports, balloon, glider and ultra-light landing facilities, and grass landing strips.

Through Gov. Pritzker’s historic, bipartisan Rebuild Illinois capital program, IDOT is investing a total of $150 million in aviation. Last year, the governor announced a $94 million commitment to airports throughout the state, unlocking $11.5 million in local contributions for a combined investment of $105 million. The funding was the largest statewide capital investment for airports in state history.

To learn more about aviation in Illinois and the Illinois Aviation System Plan, visit www.ilaviation.com.