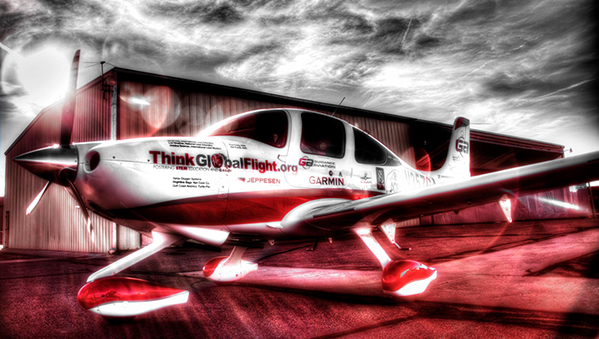 Star Aviation specializes in aviation underwriting, claims, and safety & loss control services in the insurance industry. Starr Aviation’s parent company, STARR Companies, encapsulates their mission and services best on the home website; "We are STARR Companies, a global insurance corporation that supports those who dare by putting our name on the bottom line. In Ink.  For the whole world to see.  So the great achievers in our society actually achieve, and build something better for us all:  The future."

Jim Anderson, Senior Vice President of Starr Aviation’s Light Aircraft department comments on the partnership with Think Global Flight; “Starr Aviation is proud to be a small part of such a global and worthwhile project. Our company stands for those that think outside of the box while pushing limits and Think Global Flight does just that in their cause to promote greater awareness of S.T.E.M. by way of an around-the-world flight adventure. President Abraham Lincoln put it best ‘You never stand so tall as when you stoop to help a child’. Think Global Flight is certainly standing tall.”

The Think Global Flight Crew and its Cirrus SR20 G3, donated by Guidance Aviation of Prescott, Arizona, are scheduled to take off in April of 2014 and fly around the world, stopping at schools in numerous countries to promote S.T.E.M. education and what the promises of aviation and aerospace hold for our future pilots, aeronautical engineers, and aerospace professionals.  This effort is unique in that Think Global is leveraging the latest in aviation and web based technologies to communicate with the school kids around the globe, in real time, delivering S.T.E.M. based curricula relating to the flight.  While in flight, the crew will be contacting Student Command Centers (SCC’s) via satellite phone to discuss flight planning, weather, international relations, and weight and balance requirements.  Students may also log into the website to access curricula developed by education and aviation professionals.

This April, 2013, the Think Global Flight Cirrus SR20 G3 will be on display along with its flight crew, Captain Judy Rice and Navigator Fred Nauer at the Sun n’ Fun Air show in Lakeland, Florida.