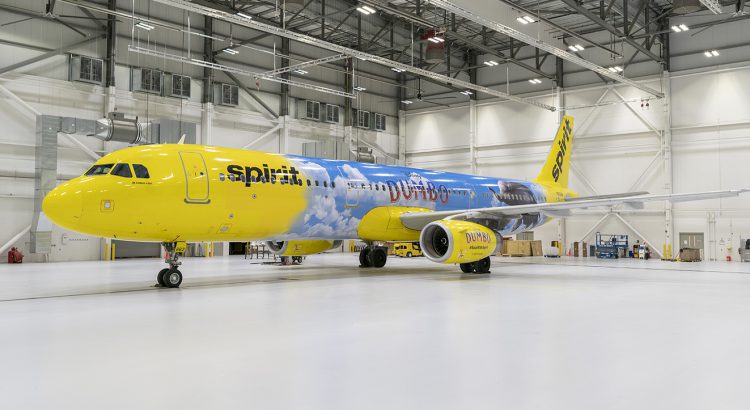 Spirit Airlines has unveiled its specially-themed Airbus A321 featuring a larger-than-life image of the beloved Disney character Dumbo. The airline known for inspiring its guests to take to the skies, is teaming up with Disney to celebrate the upcoming release of its live-action movie “Dumbo,” director Tim Burton’s all-new take on the classic story where differences are celebrated, family is cherished, and dreams take flight. Dedicated to everyone’s favorite flying elephant known for inspiring many to soar to new heights, Spirit and Disney revealed the new plane with a time-lapse video of the decal wrapping process which took place at Spirit’s state-of-the-art Detroit maintenance hangar.

The plane will join Spirit’s growing Fit Fleet of 132 aircraft, one of the youngest and most fuel-efficient in the country. The plane takes off today from Detroit Metro Airport (DTW) to Orlando International Airport (MCO). Guests traveling between Detroit, Orlando, San Juan, Fort Lauderdale, and Baltimore/Washington will have the chance to fly with “Dumbo” on the first three days of service. The aircraft will then travel across the country for the next two months, celebrating the movie’s release on March 29, 2019.

“As Florida’s Hometown Airline, we are excited to bring the magic of ‘Dumbo’ to our fleet,” said Bobby Schroeter, Spirit Airlines’ Vice President of Sales & Marketing. “The themes in Disney’s ‘Dumbo’ align with Spirit’s mission to inspire our Guests and families to take flight with the best value in the sky. This special addition to our fleet is another opportunity to surprise and delight our valued Guests and showcase Spirit’s fun, friendly service.”

As the “Dumbo” plane takes flight, Spirit also gave away a trip to the “Dumbo” world premiere in Los Angeles. One Guest who entered Spirit’s online sweepstakes* won the grand prize, including four tickets to the movie premiere, four roundtrip tickets to Los Angeles on Spirit, and a 2-night hotel stay.