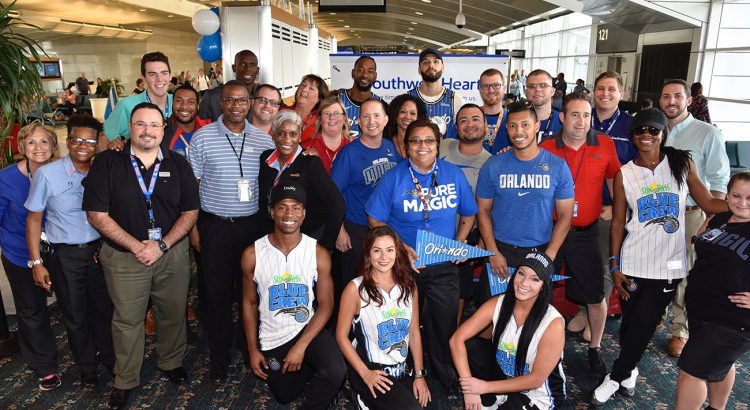 Terrence Ross’ Twitter handle, @TFlight31, is one of today’s more fitting NBA social media names considering the 27-year-old has “taken flight” innumerable times throughout his NBA career – most notably when he won the slam dunk contest during his rookie year.

Now, in his seventh NBA season, that Twitter name – while still very applicable to what he does on the basketball court – could refer to something even more literally connected to “flying.”

Ross, along with teammate Evan Fournier, assisted Southwest Airlines staff at Orlando International Airport during an outbound flight to Austin, Texas. Gate 123, to be exact, was rocking throughout the afternoon, as the two Magic guards welcomed Flight 2392’s passengers, scanned their boarding passes, helped marshal the aircraft and took pictures with dozens of fans.

“First time the correlation (to his Twitter handle) actually made sense (that way) was today,” Ross said with a chuckle. “It was fun, it was amazing. Everybody’s showing love and having a good time doing it.”

Fournier, too, had a blast spending time with Southwest customers and employees, who he now has even greater appreciation for after seeing how well they do their jobs and how hospitable they are with all of their guests.

“You definitely learn some stuff,” he said. “There’s so much more than just getting inside the plane and just flying it. There is a lot of stuff to know.”

“I got to get inside a cockpit, went to the tarmac, it was fun,” the Frenchman added. “It’s always fun to share this moment and meet the fans.”

Also, at the airport to hand out souvenirs and help make this event even more memorable for all the customers were Magic Community Ambassador Bo Outlaw, STUFF the Magic Mascot and the Magic’s SunPass Blue Crew.

Just like the Magic, Southwest is known for its superior customer service. In fact, Southwest has ranked No. 1 among low-cost carriers in customer satisfaction the last two years, according to research done by J.D. Power.

“We love having the Orlando Magic out here to the airport with us,” said Mackenzie Means, a business consultant on the experiential marketing team at Southwest. “Southwest is all about hospitality and surprising and delighting our customers every day. So, bringing out our great partners at the Magic delivers on that promise and just really creates a fun atmosphere in our terminal.”

“It’s really a great fit for both brands because that hyper-focus on the customer experience and hospitality – making people feel like they are at home when they are in your home – that’s just a great mash-up of two different brands,” he added.