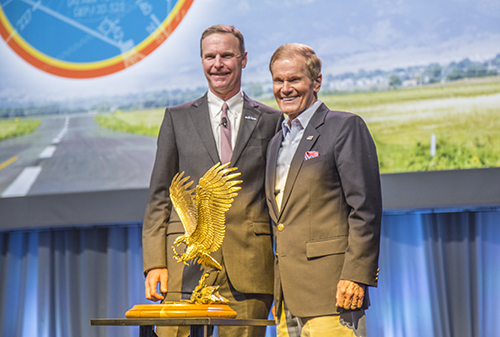 The National Business Aviation Association (NBAA) welcomed the announcement that former senator, NASA shuttle astronaut and tireless aviation advocate Bill Nelson has been nominated by President Biden to serve as the next administrator of the National Aeronautics and Space Administration (NASA).

“Sen. Nelson will be an outstanding NASA administrator, and we strongly support his nomination to the position,” said NBAA President and CEO Ed Bolen.

In 2016, NBAA bestowed its Meritorious Service to Aviation Award to Nelson, in recognition of his unwavering support for business aviation throughout his time in Congress. Nelson has also been a frequent speaker at NBAA’s Business Aviation Convention & Exhibition (NBAA-BACE). Learn more about NBAA’s recognition of Sen. Nelson.

A lifelong Floridian, Nelson served in the state legislature from 1972-1978 before representing Florida’s 9th congressional district in the U.S. House of Representatives from 1978-1990. He was elected in 2000 to represent the Sunshine State in the U.S. Senate, where he served three terms.

In January 1986, Nelson became the second sitting member of Congress to fly into orbit, spending six days onboard the space shuttle Columbia as a payload specialist for the STS-61-C mission.