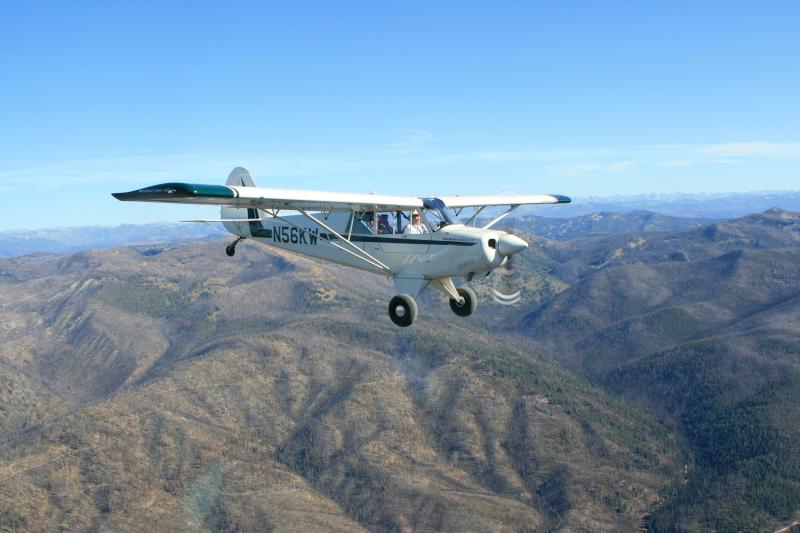 TAMPA, Fla. (Nov. 5, 2009) — At the Aircraft Owners and Pilots Association (AOPA) Summit today, the Lindbergh Foundation announced that its efforts to facilitate the donation of a Factory-new 180HP A1C Husky to the Kenya Wildlife Service (KWS) have been accomplished.

For six years, highly acclaimed aerobatic pilot and environmentalist Patty Wagstaff has helped the KWS pilots to become safer pilots, by teaching them aerobatic and maneuvering skills that are useful when helping to seek out elephant poachers in the Game Reserve.

Last February, Lindbergh Foundation Board members and ground school training gurus John and Martha King joined Patty in providing such training to KWS pilots in Kenya. Dr. Rich Sugden, air show performer, vintage aircraft owner and businessman also joined the training team.  Sugden, and his wife Sue, were so impressed with the work being done by the KWS pilots and the risk they willingly undertake to preserve endangered wildlife in Kenya that they felt compelled to do more to help.  The help came in the form of a new Husky.

“What began as a simple partnership between the Lindbergh Foundation and Patty Wagstaff to support her work training the KWS pilots to safely protect wildlife from poachers, has evolved into a gift that we could never have imagined,” said Lindbergh Foundation Chairman, President and CEO Larry Williams, CEO of BRS Aerospace.  “Since that first announcement only a year ago, the Foundation’s involvement and support of the KWS has grown to include expanded training opportunities for their pilots, a DVD documentary filmed by journalist Miles O’Brien, and now in facilitating the donation of an aircraft with Rich Sugden”.

On Saturday, October 31, the Lindbergh Husky left the factory in Wyoming, arriving at GUT-Works, LLC, in Lawrence, Kansas, on November 1, completing the first leg of a journey halfway around the globe to enter service under the KWS. GUT-Works, another major sponsor of this project, is handling the export paperwork, disassembly, containerizing, and shipping of the Husky, passing along only the hard costs of the project. “GUT-Works has been shipping Aviat and other aircraft all over the world for nearly 10 years, so it was natural for us to be involved in this project,” explained manager, Ron Renz. “Projects like this make being a good corporate citizen fun. This project is also an excellent way to show the general public how General Aviation helps contribute to society and the environment.”

This donated Husky is unique in yet another way: it’ll be the first such plane in KWS service equipped with a Forward Vision EVS-100 infrared camera and display, a thermal-imaging system that will allow pilots to “see” at night, or low-visibility operations. Patrick Farrell, CEO of Forward Vision, noted, “A veterinarian by training, I’m especially proud that our EVS technology will be used to help stop illegal poaching of these precious animals, as well as to keep the KWS pilots safe in doing their jobs.”

The Husky is expected to arrive in Kenya in early February 2010, in time for the next session of training.

In addition to those mentioned herein, The Lindbergh Foundation is grateful to these additional sponsors for their kind support in getting this donated Husky to its new home in Kenya: