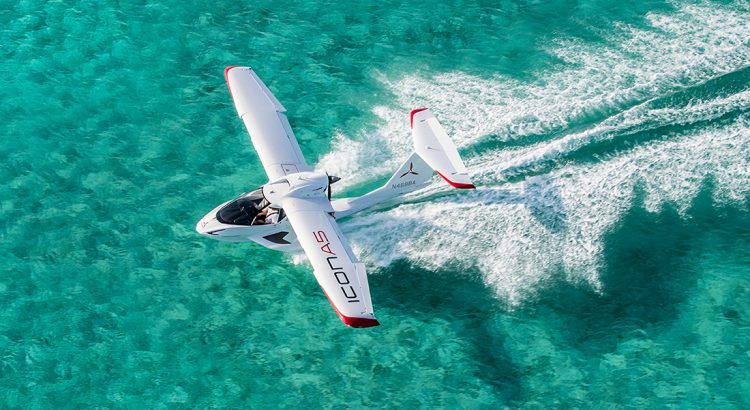 On Friday June 7th I had the pleasure of flying the ICON A5 for the first time. I’ve flown some light sport aircraft both land and sea, but the ICON is a rare bird, especially the way it handles. The wing design is built so it doesn’t completely stall, at least not the entire wing. A portion of each wing continues producing lift allowing the pilot more time to recover from a stall and maintain altitude. According to ICON, the aircraft is the first FAA certified Spin Resistant Airframe. That being said, the stall is so benign that it really is no factor in most scenarios, you can climb with no fear of a spin.

My demo pilot, Andy Jackson, took his time taking me through the paces. After a land take-off we climbed out over Tampa Bay. We started with shallow banked turns followed by steep turns to demonstrate the aircraft handling. From there we proceeded into power on and off stalls. The Icon wing keeps you in complete control during a stall. With minimum pilot input the wings remained level while you’re losing altitude.  And you need NO rudder input. In fact, you can leave your feet on the floor during the maneuver and recovery. To recover just lower the nose of the aircraft, add full power and gain flying speed to maintain altitude.

We then proceeded to do some water work; water landings and take-offs with a couple of turns at slow speed on the water followed by a step taxi and high speed turns.  I say high speed, not much is high speed in this aircraft. I remind the reader that the Icon is a Light Sport aircraft, meaning it is lighter than most seaplanes. So, the weather, winds and waves, will limit the aircraft maneuverability on water. However, it’s not much different than any other seaplane on the water. The pilot just needs to know his limitations as well as the aircraft limitations.

We know that speed is an important factor when flying. Pilots become very aware of flying speed at all times. Flying the ICON is no different with one exception; the ICON has a color coded Angle of Attack (AOA) gauge positioned in the middle of the control panel for easy reference by the pilot. The AOA gauge has a white colored pointer. The pilot’s job is to keep the pointer within the green arc and by doing so there is little chance that you will get yourself in trouble. In addition to outside references, pilots of the ICON will need to include this valuable instrument into their visual scan of the cockpit instruments.

I’ve read some sad stories of those pilots that perished in the Icon. I respect other pilots and the various levels of pilot experience. Unless I’m in the cockpit with them I will never judge another pilot’s decision.  However, after flying the ICON I find it hard to believe that with proper training and experience, pilots will get themselves in trouble flying the ICON. Of course it’s a new aircraft to the marketplace with its own set of flying characteristics that pilots will need to adjust to. With any aircraft, it takes time to become proficient. This is done with practice over time to understand both the pilot and aircraft limitations.

I truly enjoyed my one hour with Andy flying the Icon 5. To Andy and Jenna Slater at ICON headquarters in Tampa, thanks for the opportunity.

Jack Ferns is a part-time flight instructor in both land and seaplanes in Leesburg, Florida. He is a Designated Pilot Examiner (DPE) and former Aviation Director for the State of New Hampshire.