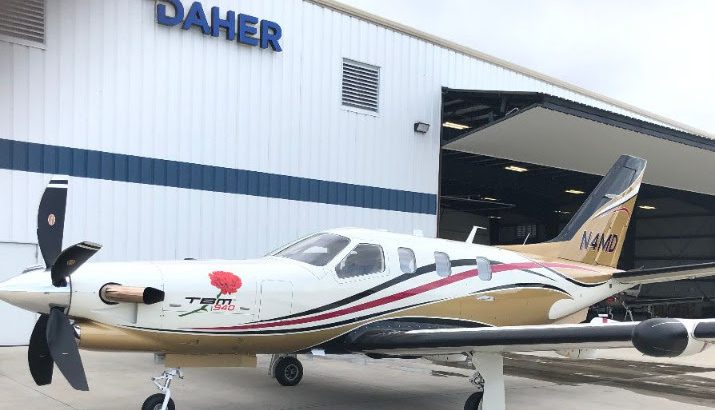 Daher has announced the delivery of its 300th TBM 900-series very fast turboprop aircraft, which incorporates a personalized paint scheme for its owners – Dr. Ian Blair Fries and his wife Susan Fries, who received this TBM 940 version as the fourth TBM-family airplane they have acquired over the past 20 years.

The special gold and white exterior design, created by Scheme Designers for the Fries, includes an extra personal touch added at the Daher Aircraft, Inc. subsidiary in Florida, USA: a red carnation in honor of the flower worn daily for 50 years by Dr. Fries in honor of his patients.

Daher’s TBM 900 series is the company’s in-production TBM product line, having been launched in 2014 and available today in the TBM 910 and TBM 940 configurations. Prior to receiving their new TBM 940, Dr. Fries and Susan previously owned a TBM 700B, TBM 850 and TBM 900.

“Based on the TBM’s proven design, the upgrades that Daher brings to each new model amply justified our purchases of the four aircraft,” he explained. “The TBM fits our transportation profile: I can plan for a 1,000-nautical mile flight under almost any conditions. And it is a pleasure to work with many of the same people for years, which is a credit to Daher. Additionally, I consider the five-year warranty of significant value alone in justifying a new acquisition.”

As an active pilot, Dr. Fries has logged more than 6,000 flight hours and holds an ATP license with a Certified Flight Instructor Instrument rating. He is a member of the Aircraft Owners and Pilots Association’s (AOPA) Board of Advisors, and serves as aeromedical consultant for the AOPA and the Teamsters Airline Division.

“We are grateful to Dr. and Mrs. Fries for their more than 20-year-old loyalty to the TBM. So it was very appropriate they received the symbolic 300th TBM 900-series aircraft as their latest acquisition,” commented Nicolas Chabbert, the CEO of Daher Aircraft Inc. and Senior Vice President of Daher’s Aircraft Division. “Their enthusiasm for the TBM 940 reaffirms that Daher is on the right path as we continue to evolve the TBM family through a combination of efficiency and safety, providing the ultimate flying experience for owners and operators.”

Featuring an increased level of automation that reduces the pilot’s workload and optimizes performance and safety, the TBM 940 incorporates an automated throttle and an automated icing detection system – both of which are installed for the first time on a standard production turboprop aircraft weighing less than 12,500 lbs. (5.7 metric tons). Their integration further builds on Daher’s TBM e-copilot® strategy of introducing functionality for improved operational safety on the TBM product line.

Some of the TBM 940’s enhancements – such as cabin upgrades for style, ergonomics and comfort – are applied as well to Daher’s entry-level TBM 910 version, along with the automated icing detection system. Both aircraft also benefit from the latest Garmin cockpit features: Surface Watch™, which gives pilots better situational awareness in the airport environment; BARO VNAV, allowing approaches with vertical guidance when the Wide Area Augmentation System (WAAS) is not available; and visual approach assistance in the execution of visual approaches at uncontrolled airports with vertical guidance.