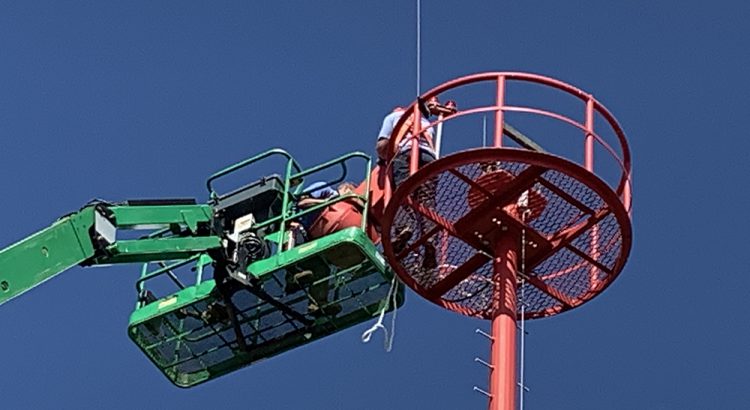 A rotating beacon is a visual navigation aid that projects a beam of light used by pilots to visually locate a lighted airport at night. For civil airports, like Boca Raton Airport, the beacon rotates to produce alternate clear and green flashes of light visible to pilots from the air.

The new beacon installed at the airport is the first of its kind to be approved by the FAA for use in public airports. “Upgrading the rotating beacon to LED offers numerous benefits and is in keeping with the Boca Raton Airport Authority’s goal to enhance safety and implement cost-efficient energy saving measures,” said Clara Bennett, Executive Director of the Boca Raton Airport Authority.

•             Energy savings: The new L-802A(L) LED rotating beacon has a higher light output than the huge 36” traditional rotating beacons you see at many airports and uses a quarter of the power over traditional Beacon technology. The LED beacon uses the power equivalent of about (2) 100watt incandescent light bulbs.  So, the same power we used to use to light a small garage- we now use to light up the sky for pilots!

•             Light pollution:  The LED technology in the beacon allows us to have a much more “defined” light beam.  The light “wash” up to the sky and down on neighborhoods if far less with the new LED beacon.