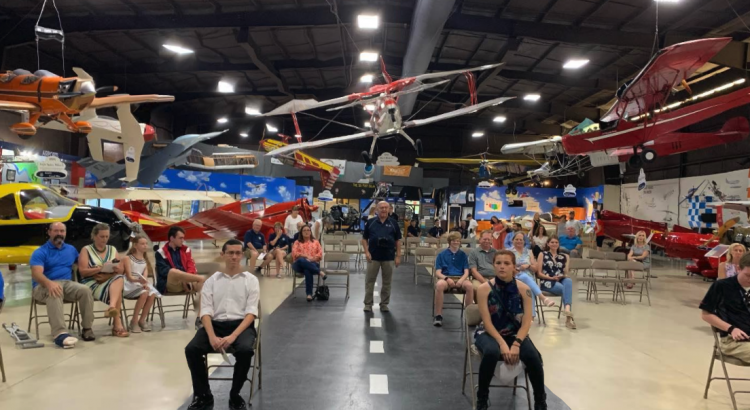 The Central Florida Aerospace Academy (CFAA) is a Polk County Pubic School career academy designated to Kathleen High School. CFAA is located on the SUN ‘n FUN Expo Campus and has a unique partnership with the Aerospace Center for Excellence through the Central Florida Aerospace Academy Foundation. Donors such as James C. Ray Foundation, and the events held throughout the year on the SUN ‘n FUN Expo Campus including the annual SUN ‘n FUN Aerospace Expo, fund ACE’s youth programs and scholarships. The Ceremony of Success is an example of the commitment these organizations have in ensuring the ability for top performing students to continue their pursuit of aerospace education in post-secondary institutions.

The Top Gun Citation of Merit is presented to the graduating Senior student who consistently demonstrated outstanding scholastic accomplishment, exemplary character and motivating leadership during their tenure at CFAA. The Top Gun honoree is one who has been an example to others in service to their community and work ethic defining them as an influential moving force in the future of the aerospace industry by supporting the Aerospace Center for Excellence’s mission of “Engage, Educate and Accelerate the next generation of aerospace professionals”.

This year’s recipient, Sean Stolz, had all the check marks for this recognition. A James C. Ray Scholarship flight training recipient, Sean earned his single and multi-engine certificates, is the Vice-President of the Lakeland Aero Club, Ambassador for CFAA, and graduated in the top 5% of his class. In addition to earning the Top Gun award, Sean was also the recipient of the “Catshot Award” referring to the catapult on an aircraft carrier that launches an F-16 off an aircraft carrier. The CFAA Foundation thanks the generous donations of Bill and Judy Young for the $5,000 Top Gun Citation of Merit Scholarship and an anonymous donor for the $5,000 Catshot Award.

As this year’s Top Gun recipient, Sean had the honor of unveiling his name which is now affixed on the F-14 Tomcat fighter jet outside of the Florida Air Museum on the SUN ‘n FUN Expo Campus for the next year. This honor recognizes a Top Gun’s accomplishment and serves as inspiration for the underclassmen of CFAA whose High School resides across the street.

Sean Stolz unveils his name on the F-14 Tomcat recognizing him as this year’s Top Gun Citation of Merit award winner.

The Ceremony of Success also awarded James C. Ray Continuing Education Scholarships to 8 deserving students. These scholarships are renewable each year if the student continues to excel in their pursuit of a college degree. Those attending an institution within Polk County, Florida are eligible for a $5,000 scholarship and outside of the county are eligible for $2,500. The total 4-year value of these awards is $100,000.