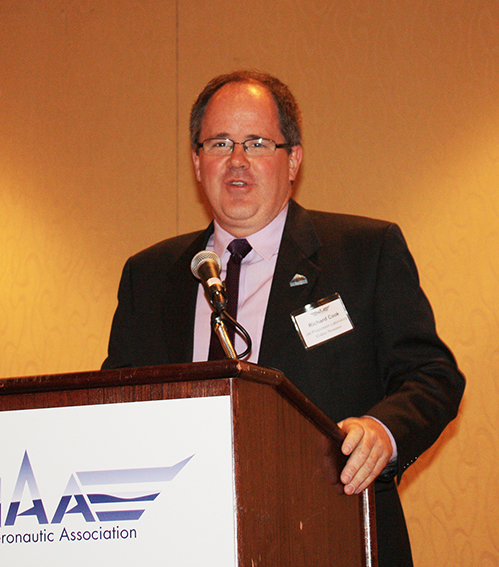 The Collier Trophy is awarded annually for the greatest achievement in aeronautics or astronautics in America, with respect to improving the performance, efficiency, and safety of air or space vehicles, the value of which has been thoroughly demonstrated by actual use during the preceding year. The list of Collier winners represents a timeline of air and space achievements, marking major events in the history of flight. (Richard Cook with JPL at right. Photo courtesy of NASAO)

Walter Boyne, Chairman of NAA and Chairman of the Selection Committee said this was the most competitive Collier Selection Process that they have experienced in many years.  “Every nominee came to the committee with significant accomplishments and achievements during the year as well as energized and comprehensive presentations,” said Boyne. “The NASA and the Jet Propulsion Laboratory should be very proud of this achievement.”

Jonathan Gaffney, President and CEO of NAA, managed the selection process.  “We were honored to have an outstanding group of aviation and aerospace experts participate on our Selection Committee and, by their presence and interaction, certainly enhanced the significance and importance of the Collier Trophy. It was an extraordinary day seeing some of the remarkable work going on in aviation and aerospace.”

Other nominees for the 2012 Collier Trophy were: