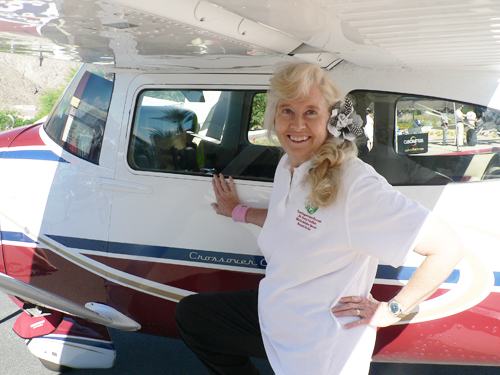 Columbia College recently presented its Distinguished Alumni Award for 2013 to State Aviation Journal (SAJ) writer, Penny Rafferty Hamilton, Ph.D.(shown at right). Dr. Hamilton was selected for this honor based on her regional and national recognition in the field of aviation education — with particular emphasis on teaching women to fly — and for her many other achievements.

"Penny works tirelessly to promote aviation education," said SAJ Publisher, Kim Jeffrey Stevens. "I am thrilled that we have had the opportunity to showcase Penny’s writing."

With her husband, Bill, she co-holds a world aviation speed recognized by the National Aeronautic Association and the Fédération Aéronautique Internationale. In 2011, Dr. Hamilton was inducted into the Colorado Aviation Hall of Fame. Her husband, nationally syndicated columnist and author, William Hamilton, was inducted to the Colorado Aviation Hall of Fame in 2008.

"Learning to fly gives you a new perspective on the world and your life" says Dr. Hamilton who the author of two history books centered in Grand County, Colorado, and is the co-author, with her husband, of a series of espionage novels. They write as: William Penn. In 2012, she received the National State Aviation Officials (NASAO) National Journalism Award. Earlier, she was named an ABC-TV Denver 7 Every Day Hero, received the Colorado Association of Realtors Good Neighbor Award, and given a Lifetime Achievement Award by the Greater Granby Area Chamber of Commerce. For her many achievements in aviation, the Federal Aviation Administration (FAA) named an aerial intersection over Tabernash, Colorado, in her honor. She earned a B.A. degree from Columbia College in 1976 and went on to earn a Master’s and a Ph.D. at the University of Nebraska-Lincoln.