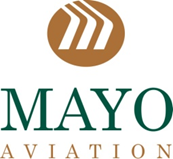 Mayo Aviation, the largest and most experienced aircraft management company in the Rocky Mountain Region, announces the addition of a beautifully appointed Bombardier Challenger 300 to its growing fleet of business aircraft.

Mayo Aviation recently took delivery of the Challenger 300, adding it to the company’s FAA Part 135 commercial air carrier certificate late last week. The 2012 aircraft is luxuriously equipped with nine passenger seats, state of the art entertainment system, and onboard broadband Internet. The exceptional performance and reliability characteristics of the super midsize Challenger 300 have made it a favorite choice in its class among aircraft owners and operators around the world. The jet has a range of over 3,000 nautical miles and is capable of flying non-stop from Denver to destinations in Canada, Central America and the U.S., including Alaska.

"The Challenger 300 is a great addition to our fleet and we believe our clients are really going to enjoy this aircraft," said Bill Mayo, CEO of Mayo Aviation. "The aircraft is roomy, comfortable, and a great option for longer flights and business trips. The onboard broadband Internet service creates the perfect airborne office for the most discerning business travelers, allowing them to be more productive while en route to their destination," added Mayo.

The addition of the Challenger 300 brings the total number of aircraft in Mayo Aviation’s fleet to 18, any of which can be booked by calling (303) 792-4020 or visiting the company’s website atwww.mayoaviation.com.

Established in 1978, Mayo Aviation is the largest and most experienced aircraft management company in the Rocky Mountain region offering aircraft management, maintenance services, sales and acquisitions, and aircraft charter throughout the U.S. Headquartered at Centennial Airport, just southeast of Denver, Mayo Aviation operates aircraft based at various locations throughout the Denver Metro area; along with Aspen, Grand Junction and Montrose in Colorado; as well as Essex County Airport in the greater New York City area and New Castle County Airport south of Philadelphia. Mayo Aviation is an FAA Part 135 certified air-carrier and operates to the highest safety standards in the industry, undergoing rigorous safety audits and certifications on a continual basis. The National Business Aviation Association (NBAA) recently awarded Mayo Aviation with its highest safety award, recognizing Mayo Aviation as one of the safest operators in the United States. For more information, visit www.mayoaviation.com.