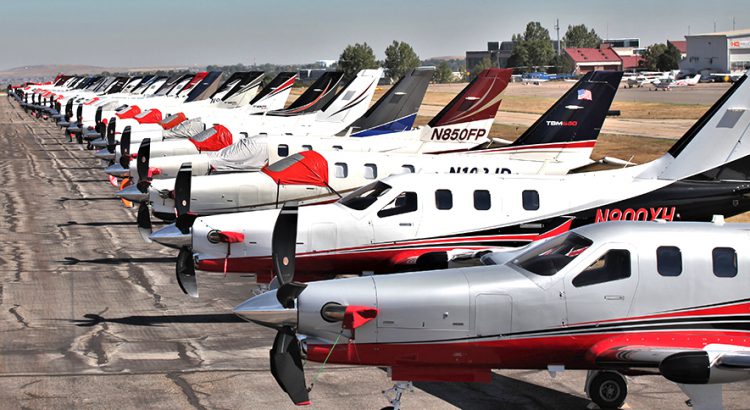 The TBM Owners and Pilots Association’s (TBMOPA) 2019 convention brought together TBM owners and their Daher-built very fast turboprop aircraft from around the world, underscoring this annual gathering’s importance as one of the largest such meetings for a turbine aircraft type.

Converging at the Rocky Mountain Metropolitan Airport in Denver, Colorado were 102 aircraft representing all TBM versions produced by Daher to date: the TBM 700, TBM 850 and TBM   900 series. In total, 345 participants – including 135 owners, of which 51 were first timers – attended the convention, held September 25-29 at the Denver Marriott Tech Center.

TBMOPA’s members attended three days of dynamic academic and learning sessions customized for TBM owners and operators. The primary focus was on airmanship and safety, with the performance of safe landings as topic of a special session moderated by Raphaël Maitre, the Daher Airplane Business Unit’s Vice President of Customer Support and involving Igor Lucas of Simcom and Dierk Reuter, a TBM 930 owner.

Among the convention’s topics were the development and use of Daher’s Me & My TBM application; the service advantages provided by the TBM Care organization.

“The 2019 TBMOPA convention was the opportunity to unveil our development plans to a selected audience, including how the Quest Aircraft Company’s acquisition will generate benefits for the TBM flying community,” commented Nicolas Chabbert, Senior Vice President of the Daher Airplane Business Unit. “In Denver, we were able to meet many new members of the TBM family who represent different backgrounds and profiles.”

Chabbert also confirmed Daher’s ongoing support for the TBMOPA’s activities, with this member organization acknowledged as the aviation industry’s closest working relationship between an aircraft manufacturer and an association of owners/pilots.

As part of the 2019 TBMOPA convention, presentations were made by Daher as the aircraft manufacturer, along with such TBM system vendors as Pratt & Whitney Canada (producer of the TBM’s PT6 turboprop engine) and Hartzell (the TBM propeller supplier).

Among the convention’s key speakers were aviation legend Dick Rutan, who spoke about his around-the-world record breaking flight with the Voyager aircraft; along with Dierk Reuter and Phil Bozek, describing their New York-Paris non-stop trans-Atlantic flight in a TBM 930. Dr. Ian Fries, a TBM owner and recognized medical expert, explained the challenges of a pilot’s medical examination. Erik Eliel from Radar Training International provided tips on the TBM weather radar’s optimal use.

TBMOPA convention activities for companions of TBM owners and operators included the “pinch hitter” flight training program for non-pilots, a “TBM flying is fun” presentation by Catherine Fish, and a tour of vineyards in Denver area.

“The 2019 TBMOPA convention marked another step in meeting our association’s goal of promoting safety and providing opportunities to maximize both the pleasure and utility of the TBM ownership experience,” TBMOPA Chairman David Scobey explained. “We very much appreciate Daher’s efforts in supporting safety-based enhancements to existing TBM currently in service, as well as for their new-production aircraft. This is a sign of the TBM manufacturer’s long-term commitment to its product line.”

He added that TBMOPA members’ attendance at the convention’s academic/learning sessions qualifies TBM owners for savings on insurance premiums, as participating underwriters offer a credit for as much as 10 percent of the hull premium after a claim-free year. “These insurance savings, plus the added safety awareness and operational knowledge gained from the technical seminars, are compelling reasons to attend the TBMOPA’s annual conventions,” Scobie concluded.

The next TBMOPA annual convention will be held September 8-12, 2020 in Montreal, Canada. More information is available at www.tbmowners.org.