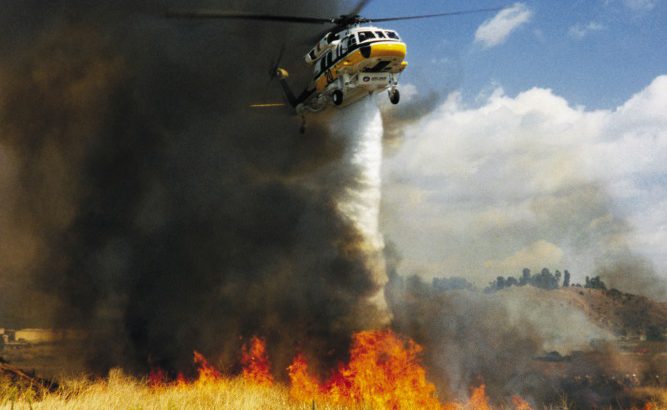 United Rotorcraft announced recently that they have received a contract from Los Angeles County Fire Department’s Air Operations (LACoFD Air Ops) to complete their fourth FIREHAWK® helicopter. The contract is for the conversion of a new Sikorsky S-70i helicopter into a multi-mission firefighting aircraft. United Rotorcraft’s Decatur, Texas, team has already painted two new S-70i helicopters this past spring in the traditional black, white and yellow paint scheme of LACoFD Air Ops.

“We as a department are very much looking forward to continuing, and growing, the long-standing relationship between United Rotorcraft / Air Methods and LACoFD. Over the years, the supplied mission equipment, expertise and support have stood the test of time and abuse,” says Dennis Blumenthal, chief of Helicopter Maintenance for LACoFD.

The avionics modification to the aircraft includes an audio system upgrade and expansion, tactical radios and a wireless audio system. TCAS, flight following and a public address and siren system will be added. Multiple external lighting systems will be integrated, as well as an external hoist for search-and-rescue operations.

“Teaming up with LACoFD Air Ops back in the early 2000s to complete their first three FIREHAWKS® has been one of United Rotorcraft’s greatest projects. That those aircraft are still flying is a testament to the FIREHAWKS® reliability, durability, and effectiveness. To be able to add new aircraft to their fleet is a privilege,” said Mike Slattery, president of United Rotorcraft.