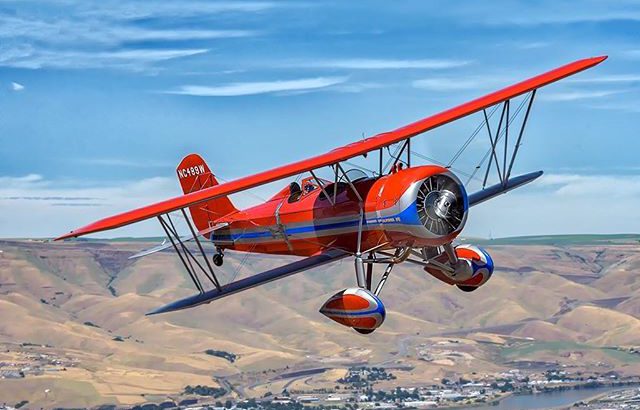 Like a flight back in time, historic Stearman Speedmail biplanes will carry mail from San Diego to Seattle from Sunday, May 13, to Friday, May 18, to commemorate the 100th anniversary of airmail service in the United States. The Mail Centennial Celebration includes a stop in Olympia where the public can view these rare planes.

The Olympia stop is from 1:30 to 3:30 p.m. on Friday, May 18. The event is being hosted by the Washington State Department of Transportation’s Aviation Division and takes place at the division’s offices at the Olympia Regional Airport in Tumwater.

Attendees can speak with pilots and get an up-close view of three Stearman Speedmail biplanes used as mail planes in the early 1930s. Powered by 450 horsepower engines, the wood and fabric open-cockpit aircraft were noted for their dependability and ability to carry heavy loads. Of the 41 built, only seven still fly – so this is a rare chance to see these biplanes as they retrace the pioneering West Coast airmail route, known as Contract Air Mail 8 (CAM 8).

This historical reenactment honors the first government-operated airmail flight in America. On May 15, 1918, President Woodrow Wilson and members of Congress watched an Army pilot depart in a wood and fabric biplane from Washington, D.C., bound for New York.

The 2018 flight is sponsored by the nonprofit Western Antique Airplane and Automobile Museum of Hood River, Oregon and endorsed by the U.S. Postal Service. The biplanes will carry commemorative envelopes that will be officially postmarked at each of the 12 stops. Delivery of traditional residential and business mail will not be affected.

Six pilots will take part in the event with three, Addison Pemberton and Jeff Hamilton, both from Spokane, and Ben Scott of Reno, Nevada, sworn-in as official airmail pilots to assist local post office authorities.

Pemberton said the airmail service was the first step toward American commercial airline service, noting it was considered crucial enough to start even while the nation was fighting World War I. “The potential and importance of aviation was recognized even in those early days,” he said.

After departing San Diego, on Sunday, May 13, stops will include Los Angeles, Bakersfield, Fresno, San Francisco, Concord and Redding in California; Medford and Eugene in Oregon; Vancouver, Olympia and Seattle in Washington.

The flight is expected to take approximately 12 flying hours spread throughout the six-day event. Updates, including any weather delays, will be posted on the CAM 8 website as well as a Facebook page and Instagram account.

Pilots should park on the east side of the Olympia Regional Airport runway in the general aviation parking area. WSDOT Aviation’s ramp will be closed to all aircraft except those participating in the airmail reenactment.