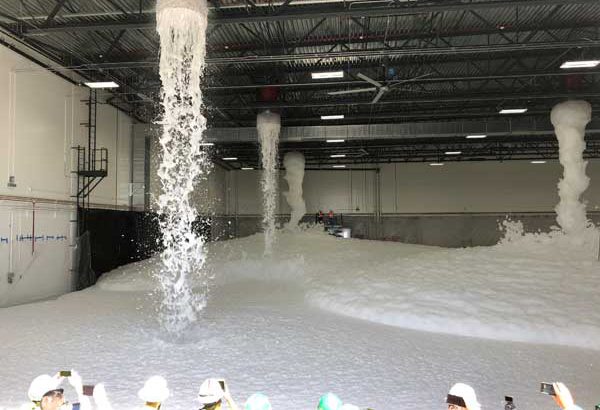 In less than three minutes, a 30,000 sq. ft. hangar was filled with foamy bubbles for a fire foam suppression test to ensure airport users and luxury jets are well protected in the event of a fire. This hangar is one of the two new executive hangars being built at Scottsdale Airport as part of the Airport Terminal Area Redevelopment project.

Aircraft with highly flammable jet fuel housed in the hangar requires a sophisticated system. This system cuts off oxygen fast enough to quell a fire in a large 30,000 square foot hangar within minutes. “These are the first hangars in the valley with this new foam technology,” says Terence A. Manning, associate director with Jensen Hughes. “The system was developed by the U.S. Air Force.” This system complies with the latest in safety standards outlined in the Scottsdale Fire Code 4283 adopted by City Council on Nov. 14, 2016.

“The City of Scottsdale has a long history of adopting some of most progressive and best fire code requirements in the country to protect and provide a higher level of safety,” says Scottsdale Fire Marshal Jim Ford. “The City of Scottsdale works to provide the best protection to our residents, visitors and luxury aircraft,” says Gary P. Mascaro, aviation director. “This is the best system out there.”

The hangars will be operated by Gemini Air Group. The new hangars are being paid for by those leasing the space, who have a long-term lease agreement with the city. The second part of this project is a new Aviation Business Center, which will be completed in late summer. Mead & Hunt and DWL have been retained to do the engineering and design work. JE Dunn is the contracted construction company.